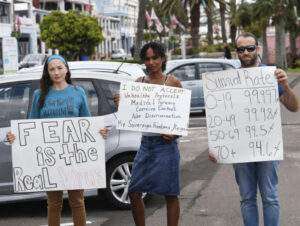 (CMC) — Dozens of people took part in a rally on Sunday against the government’s promotion of COVID-19 vaccinations and continued imposition of public health restrictions, despite two more residents succumbing to the disease, taking the death total to 29 –17 of them since April 1.

In what was dubbed the “Bermuda Freedom Car/Bike Rally”, protesters were asked to assemble on Front Street in the capital before driving around the island.

It was estimated that almost 200 cars, plus 20 motorcycles, took part in the rally. Many of the cars appeared to be filled with families.

Vehicles were adorned with signs, some of which said “My Body Belongs to God”, “Don’t Segregate Us”, “All Jobs Are Essential, Reopen” and “Revoke Emergency Powers”.

Mark Roberts, an organiser, said the aim was to “send a message to the government that we’ve had enough of these restrictions”.

He added: “We’re law-abiding citizens who want to have our own freedom of choice. I’m not against vaccination, but I believe people should be able to make their own informed decision. That’s not what’s going on here.”

Bermuda remains under an 8:00 pm to 6:00 am (local time) curfew with 540 active cases of COVID-19, down from a recent high of 904. There are 25 people in hospital with the disease, with four patients in intensive care.

Health officials say that one person died on Friday and another on Saturday.

Thirty-seven per cent of the population have been fully vaccinated with more than 50 per cent getting their first jab. The government is pushing for 70 per cent herd immunity by the end of the month.

More public health restrictions are expected to be eased from next Sunday, allowing gyms and hair salons to reopen. Restaurants are able to offer only kerbside service.

On Saturday, the government lifted some restrictions — including those for weddings.

The relaxation will allow Bermuda College and public and private schools to reopen to let students and pupils sit exams.

Outdoor weddings of up to 10 people can also be held – but receptions will not be allowed.

Minister of National Security Renee Ming will also get the power to grant large group exemptions for events to be held on or after May 9.

Organisers of the Bermuda Day holiday half-marathon, which was cancelled last year because of the pandemic, say this year’s race will go ahead on May 28, but with entries limited to 450.