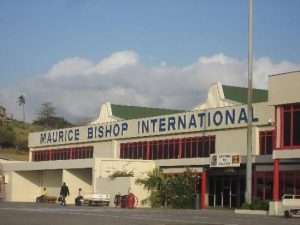 PR – The sentiments expressed by an investor suggesting that Grenada’s  lone international airport be privatized, are not reflective of any Government position or  policy on the matter.

Prime Minister, Dr. the Right Honourable Keith Mitchell assured the nation during a live  press conference on Thursday, that Naguib Sawiris, owner of Silversands Grenada, was  not speaking on behalf of the Government, but rather in a private capacity, which he has  a right to do.

Endorsing comments made earlier in the week by Civil Aviation Minister, Honourable  Clarice Modeste-Curwen, Dr. Mitchell noted that many airports around the world are  privatized but said there is no consideration to privatise Grenada’s own.

The Prime Minister said, “In no party meeting throughout my period of service in  Government, no parliamentary session, no Cabinet meeting, has there been any  discussion about privatisation of the Maurice Bishop International Airport. Does that mean  a private sector individual does not have a right to advocate it? Of course it is their right  to express their feelings on philosophical issues but in so doing, they do not articulate the  position of Government. I cannot tell the gentleman what he should or shouldn’t say, but  the bottom-line is, he cannot speak for the Government.”

Dr. Mitchell further stated, “Are we going to say that everyone who comes here and  speaks publicly, is speaking for the Government. I am amazed; I find it insulting honestly.  I don’t see how you can imply that a statement made by a private individual reflects a  Government policy. It means that the man controls the Government, which is nonsense.  The people who advocate this obviously do not have a lot of respect for me or for the  Government.

The Prime Minister also cited a general lack of balance in media reports in these and  other matters, and he recalled the likes of the late Leslie Pierre who was an exemplary  journalist.