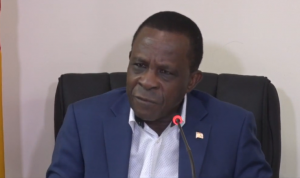 PR  – Prime Minister, Dr. the Right Honourable Keith Mitchell has expressed  concern for the well-being of the nation’s students who were left unsupervised when some  teachers were engaged in protest action.

In the continuing clamour for the immediate payment of the 4% salary increase due to  them and other public officers for 2021, some teachers engaged in a sick-out this week,  leaving students in an unsupervised environment and forcing parents to make hasty  arrangements for pick-up.

Speaking to members of the media on Thursday, during his latest media engagement,  Dr. Mitchell said, while he has no issue with the teachers seeking their increases, the  approach being taken, could have serious repercussions.

The Prime Minister said, “I don’t believe any serious person, who is concerned about our  children’s welfare, would want to create a situation where our students will be unsupervised and can become victims of their circumstances.”

He said it is alarming that the teachers received instructions from their leadership, not to  tell students that there would be a sick-out. “In other words, let the students come to  school and then tell them they have to go home at midday. You and I know, that has  consequences. The parents may have gone to work and that child may be left unattended.  You know the society we are in, there are pedophiles out there and young children may  find themselves in compromising positions; that’s a problem, no parental supervision, no  guidance, anything can happen,” he said.

The Prime Minister shared a story related to him by a grand-parent, whose young grand child walked home alone from school and waited alone at home until an adult arrived.

That, according to the Prime Minister, is frightening and he issued an appeal to teachers  and their union leadership. “I am therefore calling on the leadership of the Grenada Union  of Teachers to have a sense of fairness and concern for the welfare of the students.  Government does not have a problem with your demand for your 4% increase, it is your  right, but we must also be concerned about the well-being of our children. Leadership  should not lead us into doing something irresponsible,” he said to members of the media.

The Prime Minister added that this call should not only come from him but from every  parent and every community leader who should be similarly concerned. “I ask where are the voices of the churches in that respect. We are not talking about the 4%, we are not  asking anyone to get involved in political issues. What we are talking about is the welfare  of our children and the stability of our education system. We are ready to meet with  interested parties who are concerned to determine how we go forward,” Dr. Mitchell  stated.

The Prime Minister has reiterated Government’s commitment to honour its obligation to  pay the 4% increase, but he said it must be done at a time when the revenue earnings  can facilitate the increased public sector wage bill.

Government remains committed to meeting with the trade unions quarterly, to review the  country’s fiscal situation to collectively determine when the level of revenue collection can  accommodate the salary increases.

Meanwhile, the Prime Minister stated that there is absolutely no comparison between Government’s inability to pay the 4% increase to public officers now, and the country’s  contribution of $1 million to the Government and people of St. Vincent and the  Grenadines, following the eruption of the La Soufriere volcano.

He said, “Some people are saying if you can find $1 million to give to St. Vincent, you can  find a million every month to give public officers. It is unfortunate that anyone would use  help for our brothers and sisters in St. Vincent, who are in desperate shape, as a basis to  support the claim for public officers to get the increase at this time. When we were flat on  the ground after Hurricane Ivan, they had their own troubles; the Government there had  increases that they wanted to give their own public servants, but they gave to Grenada. I  remember too, St. Vincent and all the other OECS countries pooling their resources  together to make Grenada’s contribution to the OECS Secretariat; that’s almost $2 million  per year and they collectively took up the slack. They all made a direct financial  contribution; it is our time now to return the favour.”