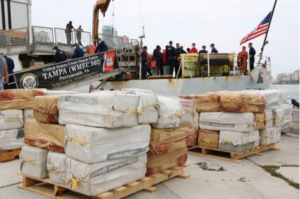 (CMC) — The United States Coast Guard said it had detained drug suspects and migrants, and seized a significant amount of drugs during patrols in the Caribbean Sea.

The US Coast Guard said the Cutter Tampa returned to its homeport in Portsmouth, Virginia after completing a 56-day counter narcotics patrol in the Central Caribbean.

The Coast Guard said an exercise on April 9 the Tampa detained three suspects and discovered 87 bales of cocaine, totalling approximately 5,500 pounds of cocaine, worth an estimated US$94.6 million.

The US Coast Guard said the crew of the Tampa’s efforts to combat drug smuggling in the Caribbean are part of Operation Martillo, “a larger effort to increase regional stability and undermine the influence of Transnational Criminal Organizations, who routinely attempt to smuggle drugs throughout the region.”

“This was our third patrol we have conducted during the COVID-19 pandemic,” said Captain Michael Cilenti, Tampa’s commanding officer, adding “our success in interdicting the first Caribbean low-profile vessel is a testament to that teamwork and focus on mission excellence that makes Tampa so special.”

The US Coast Guard said the crew of the Cutter Diligence returned to its homeport in Florida Thursday after a 59-day Caribbean Sea patrol and during that period detained 14 migrants held by other US law enforcement agencies, and “orchestrated their successful transfer to Cuban and Bahamian immigration officials for processing.