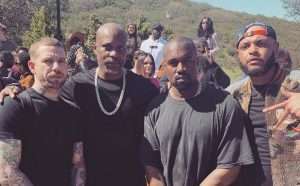 (URBAN ISLANDZ) – Kanye West has raised $1 million in t-shirt sales for the family of DMX. The news comes a day after the late rapper was laid to rest.

According to reports, Yeezy collaborated with Balenciaga to design a t-shirt in memory of ‘X,’ and the proceeds of the sale is being donated to the late rapper’s family. The t-shirts, which were priced at $200, all sold out within 24 hours after the announcement was made on DMX’s official Instagram page.

The late rapper was memorialized at an intimate private funeral at the Christian Cultural Center in Brooklyn on Sunday as family members and close friends reminisce on the life of the rapper and his infectious personality and principles in spite of his challenges as a drug addict over the years.

Among those attending were his ex-wife and fiancée, along with key members of the rap fraternity, including Kanye West, who attended the Barclays Center Memorial on Saturday. West is said to have assisted with the production aspect of the program, which included hiring talented visual artist Akeem Smith who designed the stage layout to honor DMX.

The t-shirt, while a commemorative piece, is a symbol of the impact DMX has had on many people over the many decades he has been around. His music is highly influential even after death. The shirt, which is a black long-sleeved cut t-shirt, features an image of DMX with crosses on his shoulder and his birthdate, and the date of his death is inscribed on the sleeves. Graphics that read “in loving memory” is printed on the back of the shirt.

The late rapper is survived by 15 children, including several minors. He died after suffering a heart attack brought on by a drug overdose earlier this month. He was 54 years old.