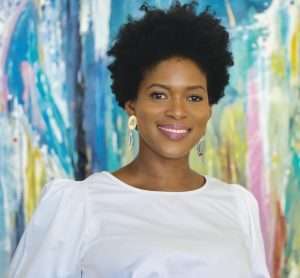 PR – Tamara Lowe, a poet from the Eastern Caribbean  island of Dominica, kicked off the annual Bocas Lit Fest on Friday 23rd April, with her  poem “To You Who Love Him.” She was the first in a packed lineup of Regional  authors, poets and spoken word artists to perform at the 2021 staging of the annual three day event presented by the National Gas Company of Trinidad and Tobago.

“This is so surreal for me,” says Lowe, who made her Festival debut this year and was  encouraged to enter by Dominican author/poet and 2020 Bocas participant Celia  Sorhaindo. “I submitted the poem with no real expectations and to be selected, and then to  participate – it is just a great feeling. I was blown away! I am grateful to the organisers of  the Bocas Lit Festival for this amazing opportunity.”

She grew up in the northern community of Portsmouth often referred to as the island’s  second town, and from her childhood days, was an avid reader and lover of poetry.

Her performance was delivered in the signature open mic event “Stand and Deliver,” this  year in virtual format due to COVID-19 limitations. Hosted by Jayron Remy AKA DJ  Rawkus of Trinidad, the segment featured fellow Trinis Alex de Verteuil and Chris Baball  and Rita Leone and Lexington Wilks of Grenada. “Stand and Deliver” ended with another  Dominican, Makyba Breezie who read a short story.

Lowe said she knew that she had a gift for writing poems when, at 13 years old, she wrote  one about death. “My mom said it was really good,” she recalls.

Over the years, she has performed at the Nature Island Literary Festival, at events held by  the Dominica Reading Association, at the Dominica Festival of Arts -Domfesta (she will  again be performing at the 2021 staging) and at poetry events held locally and online.

Lowe, who serves as the Country Manager of Tropical Shipping, an international shipping  company, says despite her love of poetry, she never considered a career in the arts, because  she did not understand back then the possibility of what it could become. Now with her  performance at Bocas, she is truly owning her gift.

“I have referred to myself as a poet, but have experienced a little bit of impostor syndrome.  When I was informed that my piece was chosen for the Festival, I felt like I finally owned  that title, even more so when I found out that my poem was the piece kicking off the  Festival! I felt so honored and it thoroughly quenched my thirst for the ‘validation’ that I  secretly craved as an artist!”

She says her poems are inspired by “everyone and everything” around her.

“I read a lot and do extensive research on topics that interest me, and also read and listen  to inspiring poets like Maya Angelou, Dionne Brand, Canisia Lubrin and Aja Monet, to  name a few. I live with a sense of discovery and wonderment that allows me to find content  in the most unexpected places. It is a beautiful experience.”

“To You Who Love Him,” the poem which she delivered at Bocas Lit Fest, speaks to the  need for our black men to be loved and emphasises that this love is worth fighting for.  Another of her poems, “A Mother and Son” examines the beauty revealed in that  unconditional bond between a mother and her son, while “To Little Black Girls Who May  Never Be Told” is a motivation piece for Black women and girls to understand and own  their power and #blackgirlmagic.

Lowe says she hopes that viewers enjoyed her Bocas performance and were inspired by  her words. “Through my work, I want people to understand the beauty and power in words.  I also want my work to effect change.”

Sorhaindo certainly thinks she has what it takes, “Tammy is an amazing poet and her  delivery is emotional and moving, she says.

With the help of author Delroy ‘Nesta’ Williams, Sorhaindo manages the Nature Island  Literary Festival Facebook page. Though the event has not occurred for some time, the  platform is used to motivate, inspire and share useful literary information with fellow  Dominicans including Lowe.

Apart from the “Stand and Deliver” segment, the three-day NGC Bocas Lit Fest saw panel  discussions on topics to include Caribbean LGBTQ issues, current readership of Caribbean  literature as well as literary reviews, a virtual walking tour, an activity-packed children’s  programme and other performances.

The Bocas Lit Fest is a year-round writing and literary arts development organisation, with  numerous initiatives forging links and opportunities between writers, readers, publishers  and others. The annual NGC Bocas Lit Fest, named as one of the world’s best, is the  organisation’s signature annual event. The organisation administers major regional writing  prizes out of the festival, which provide crucial support for Caribbean writers, including  the prestigious OCM Bocas Prize for Caribbean Literature and The Johnson and Amoy  Achong Caribbean Writers Prize. This year’s Bocas Prize was awarded to St Lucia-born,  Canada-based, poet Canisa Lubrin for her book-length poem Dyzgraphxst. She will receive  a prize of US$10,000.00 courtesy of One Caribbean Media.

The festival concluded on Sunday the 25th. This year marks its 10th staging. Follow  Tamara Lowe @iamtamaralowe or check out her YouTube channel.