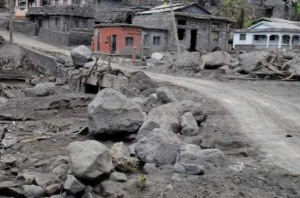 (CMC) – Scientists monitoring the La Soufrière volcano say several lahars were recorded on Tuesday even as seismic activity has remained low with only a few long-period, hybrid and volcano-tectonic earthquakes having been recorded in recent times.

A lahar is a rapidly flowing dense mixture of rock debris, ash and water. They have the consistency of wet concrete as they flow and can happen during and after eruptions.

The Seismic Research Centre (SRC) of the University of the West Indies (UWI) said that signals from several lahars were recorded on Tuesday during and after a period of rainfall.

“Following the rainfall, large amounts of steam could be seen billowing up from a valley south of the summit. This would have been generated when the runoff encountered buried volcanic deposits that were still hot.

“The volcano continues to erupt. Explosions with accompanying ashfall, of similar or larger magnitude, can restart with little or no warning. The volcano is at alert level Red,” the SRC added.

The National Emergency Management Organisation (NEMO) says as a result of the mud flows, “the Royal St Vincent and the Grenadines Police Force will be restricting person travelling into the Red and Orange Hazard Zones.”

NEMO further noted that the St Vincent and the Grenadines Meteorological Services had said that occasional showers were expected to continue during the course of the day and from late Wednesday into the end of the week.