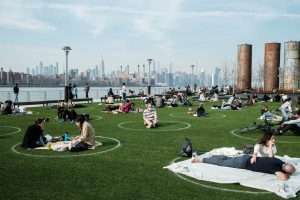 (NEW YORK POST) – Social distancing inside at 60 feet is no safer than at 6 feet — and “exposure time” indoors is actually far more important, according to a new study from the Massachusetts Institute of Technology.

“The distancing isn’t helping you that much and it’s also giving you a false sense of security because you’re as safe at 6 feet as you are at 60 feet if you’re indoors,” MIT engineering professor Martin Bazant, who authored the study, told CNBC.

“Everyone in that space is at roughly the same risk, actually.”

During the study, researchers calculated exposure risk to the virus based on factors such as amount of time spent inside, air filtration and circulation, according to the study, published this week in the Proceedings of the National Academy of Science of the United States of America.

They also looked at factors such mask use, immunization and respiratory activity such as breathing, eating and speaking.

They found that the amount of time spent indoors with an infected person is more important than the distance you are from them — a factor that the Centers for Disease Control and Prevention and the World Health Organization has overlooked, according to researchers.

“It really has no physical basis because the air a person is breathing while wearing a mask tends to rise and comes down elsewhere in the room so you’re more exposed to the average background [air],” Bazant said.

He added, “What our analysis continues to show is that many spaces that have been shut down in fact don’t need to be. Often times the space is large enough, the ventilation is good enough, the amount of time people spend together is such that those spaces can be safely operated even at full capacity and the scientific support for reduced capacity in those spaces is really not very good.”

Bazant said 6-foot social distancing rules that have shuttered businesses and schools are “just not reasonable.”

“We need scientific information conveyed to the public in a way that is not just fear mongering but is actually based in analysis,” he said.

The CDC’s social distancing guidelines are likely based on early studies with large particle respiratory droplets, he said.

“This emphasis on distancing has been really misplaced from the very beginning. The CDC or WHO have never really provided justification for it,” Bazant said.

“The only justification I’m aware of, is based on studies of coughs and sneezes, where they look at the largest particles that might sediment onto the floor and even then it’s very approximate, you can certainly have longer or shorter range, large droplets.”

The study makes no mention of whether there’s a safety risk difference between zero and six feet.

In general, masks work by blocking larger respiratory droplets, including from coughing and sneezing — but most people who transmit the coronavirus don’t show those symptoms, according to the researchers.