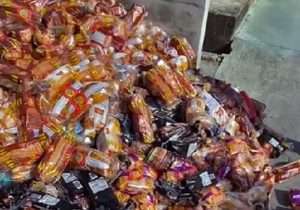 (TT GUARDIAN) – The Kiss Baking Company has confirmed it recalled bread over the weekend but denies it was for the presence of glass as being reported on social media.

A statement from general manager Rene DeGannes said a recall was initiated. However, he said the company suspected that a piece of plastic may have contaminated a loaf of bread.

“It is highly unlikely that this occurred but out of an abundance of caution, we removed all bread that may have been affected by the piece of plastic from Trinidad. This does not affect any bread in the island of Tobago,”DeGannes said.

“Kiss Baking Co Ltd wishes to assure all our customers that there is no possibility of glass being present in any of our products. Our manufacturing processes do not use any equipment containing glass. Our customers can be confident that the bread available in the market and at present in their homes is perfectly safe.”

He assured that if anyone has doubts or concerns, the company “will refund the full value of the loaf or loaves via the retailer from which the product was purchased.”

Over the weekend, a video surfaced on social media of what appeared to be Kiss workers dumping the loaves of bread on their compound. This sparked wide debate on social media, leading to Kiss’ statement yesterday as speculation about the safety of the bread products continued.

A picture posted on Facebook also began circulating of a large object embedded within one of the loaves.

“Yesterday, while feeding my son breakfast I came across this in the bread, he was like mummy what is this, only to realise a piece of tile in the bread, I was so busy that I didn’t get time to put it up, but yes ppl it is true there are pieces of material in the bread,” the person posted.

DeGannes disputed this picture but said the person would be contacted.

“Totally unrelated, unsubstantiated and needs to be investigated by our Customer Service Team. We shall make every attempt to contact the consumer that made the post,” he told Guardian Media.

The person who made the post, who did not want to be identified, told Guardian Media she had not yet been contacted by the company. However, she insisted she did not fabricate it as some are claiming on social media.

“I applaud the quick response taken…mistake do happen but glad to know the batch was recalled,” she said.

Contacted yesterday, Supermarket Association of T&T (SATT) president Rajiv Diptee told Guardian Media that Kiss Baking Company acted responsibly by recalling their product and trying to rectify the issue. However, he admitted his body could have been notified sooner.

“The company could have reached out to SATT sooner in an attempt to manage the crisis. However, after conversations with the management of Kiss Baking Company today (yesterday), we are satisfied with the media release they have put out and we are prepared to support them with all measures…that have to be taken to ensure that any customer who purchases a potentially defective product can come back to the retailer for a full refund,” Diptee said.

Social media users had mixed feelings about the company’s release. Some, like Lisa, chastised the company for what they believed was a delayed response on the matter.

“On Saturday you made the recall but your statement is only now being issued. This is for Friday’s bread. How many persons would’ve consumed from this batch of bread already?” she said.

It was a sentiment shared by another user named Sasha.

“Why are you all only now sending out this release? Even if it was in fact plastic, people were talking about this since yesterday (Saturday) morning. I would have more respect if you all owned up the same time you were sending out the drivers to recollect the items,” she said.

Others, like Angie, believed the statement to be too vague.

“I trying to understand “Highly unlikely,” she said.