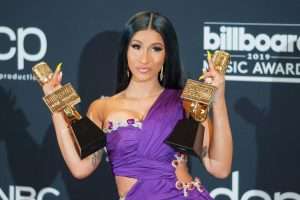 (URBAN ISLANDZ) – Cardi is making a move on her dreams of being a billionaire like Rihanna.

The Grammy award-winning artist has filed a beauty trademark for a brand named “Bardi Beauty,” which is expected to be her line of a range of beauty products. The latest money move by Cardi B was filed by her incorporated company Washpoppin Inc which lists nobody but Cardi B, whose real name is Belcalis Almanzar as the owner of the upcoming brand.

While there are few details as to what the line will include, we do know Cardi B has mentioned that on top of her list of beauty products would be hair care items that she uses or has created to help her hair grow down her back. The rapper has credited her traditional cultural recipes for the inches she has, and fans are here for it!

It appears that the beauty line has been in the works since 2019, when she said she wanted to do a make-up line. However, between then and now, there was not much going on until earlier this year when the rapper said she was frustrated at people thinking her genetics was why she has gorgeous hair, and she intended to put out her secret recipes for her fans to also capitalize on.

According to TMZ, which released the Trademark filing, the rapper and actress want to create everything from cosmetics, fragrance, skincare, nail polish, nail enamel, and more. The application was filed on April 16, 2021.