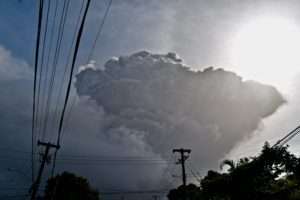 (CMC)— Leaders of the Organisation of Eastern Caribbean States (OECS) say that no Go Fund Me account has been authorised by the St Vincent and the Grenadines government to assist the island as it deals with the impact of the destruction caused by the erupting La Soufriere volcano.

A communique issued following an emergency summit of the leaders of the nine-member sub-regional grouping late on Monday, also urged “persons willing to provide assistance to not fall prey to arbitrary accounts being set up claiming to support the Vincentian relief efforts.

“People who were willing to donate were asked to be vigilant and thoroughly vet the entity to which they intended to donate.”

The communique noted that the leaders have also agreed that the St Vincent and the Grenadines government is in the process of establishing an official web platform for the relief effort that would provide information in real-time on the emerging needs and updates when these are met.

“Persons willing to contribute to the efforts, especially organizations in the Diaspora, are strongly encouraged to give cash donations and/or to consolidate any materials being sent to avoid congestion at the ports of entry.

“The OECS Authority noted that this was a major lesson from the experience of Dominica following Hurricane Maria. Minimising congestion of small packages at the ports of entry is essential to the smooth logistics of the recovery effort,” the communique noted.

Governor of the Eastern Caribbean Central Bank (ECCB), Timothy Antoine confirmed that the Monetary Council is considering a grant for the island.

OECS Director General, Dr Didacus Jules reported on the efforts of the Commission to consolidate the support being offered to St Vincent and the Grenadines by the formation of a Global Coalition of agencies that included international foundations, civic organizations, and donor sources who will work collaboratively to address the evolving needs of the situation.

“Over 150 organizations have expressed interest in the coalition. In addition to converging support, the Global Coalition will play a key role in undertaking an international campaign that will include social print and electronic media, involving major media and communication experts from around the world,” the communique noted.

In said that during the meeting, Prime Minister Dr Ralph Gonsalves had indicated that the Barbados-based Caribbean Disaster Emergency Management Agency (CDEMA) is coordinating with development partners and the United Nations with the Needs Assessment.

“There has been an outpouring of good Samaritans; the people have worked together in unity and of course the Caribbean family has responded in an amazing way. When I speak of it, my eyes well up with tears,” Gonsalves said.

But the communique noted that “amidst the harrowing conditions facing the island, the Prime Minister reported there was a reluctance on the part of the nationals to take up the offer of evacuation to other islands because these persons did not want to leave their property and possessions behind; and there was hesitancy around the vaccine requirement.

“It was feared that the situation could be compounded by the COVID-19 pandemic, which the country was working arduously to manage”

Gonsalves reported that not only were people hesitant to leave the island but hesitancy to leave their homes behind has resulted in the Coast Guard crews having to run rescue operations to retrieve these individuals.

“Prime Minister Gonsalves lamented that these rescues were putting the lives of the crew at risk because the Coast Guard had to operate along the Atlantic side of the island where the ocean was rough, compounded by possible compromise of the engines by the ash from La Soufrière.”

Gonsalves said that in the north, 40 per cent of the island’s’ agriculture was decimated, and income support, as well as infrastructural recovery, was needed immediately. He said that it would take some time for the agriculture sector to recover.

“In assessing the northern area of Saint Vincent and the Grenadines after the last explosive eruption, Prime Minister Gonsalves surmised, “The place is desolate,” the communique added.

On Tuesday, the Seismic Research Centre of the St Augustine campus of the University of the West Indies, said the “volcano continues to erupt explosively and has now begun to generate pyroclastic density currents – hot (200°C-700°C), ground-hugging flows of ash and debris.

“Explosions and accompanying ashfall, of similar or larger magnitude, are likely to continue to occur over the next few days impacting St Vincent and neighbouring islands,” it added.

The volcano hadn’t erupted since 1979 and La Soufrière has a history of deadly eruptions. Records show that in 1902, the volcano erupted for nearly eight months.