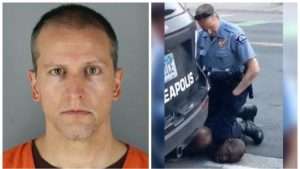 (AP) — Former officer Derek Chauvin was justified in pinning George Floyd to the ground because of his frantic resistance, a use-of-force expert testified for the defence Tuesday, contradicting a parade of authorities from both inside and outside the Minneapolis Police Department.

Taking the stand at Chauvin’s murder trial, Barry Brodd, a former Santa Rosa, California, officer, said police don’t have to wait for something bad to happen; they need only have a reasonable fear that there’s a threat and act accordingly.

“It’s easy to sit and judge … an officer’s conduct. It’s more of a challenge to, again, put yourself in the officer’s shoes to try to make an evaluation through what they’re feeling, what they’re sensing, the fear they have, and then make a determination,” Brodd said.

He also said he doesn’t believe Chauvin and the other officers used deadly force when they pinned Floyd on his stomach, with his hands cuffed behind his back and Chauvin’s knee on his neck or neck area for what prosecutors say was 9 1/2 minutes.

Brodd likened it to a situation in which officers used a Taser on someone fighting with officers, and the suspect fell, hit his head and died: “That isn’t an incident of deadly force. That’s an incident of an accidental death.”

Several top Minneapolis police officials, including the police chief, have testified that Chauvin used excessive force and violated his training.

And medical experts called by prosecutors have said that Floyd died from a lack of oxygen because of the way he was restrained.

But Brodd said: “I felt that officer Chauvin’s interactions with Mr. Floyd were following his training, following current practices in policing and were objectively reasonable.”

Under cross-examination by prosecutor Steve Schleicher, Brodd agreed that the use of force must always be reasonable and that officers must stop or lessen that force until it becomes reasonable.

The witness said it appeared to him that Floyd was still struggling while he was on the ground.

The matter of what is reasonable is important: Police officers are allowed certain latitude to use deadly force when someone puts the officer or other people in danger.

Legal experts say a key question for the jury will be whether Chauvin’s actions were reasonable in those specific circumstances.