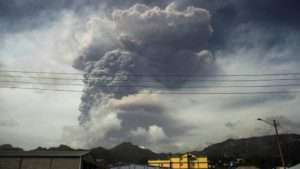 (T&T NEWSDAY) – THE Vincentian Society for the Prevention of Cruelty to Animals (VSPCA) has launched an emergency GoFundMe page as the La Soufriere volcano becomes increasingly active.

It is also urging owners not to leave their pets behind when evacuating.

The volcano erupted three times on Friday and activity has been increasing. An evacuation order was issued on Thursday for those in the “red zone” in the northern part of the island.

Fortunately for the VSPCA, its shelter is within the green zone, but in a Facebook post, it said, “We’re getting many reports that people who have fled, have left their animals tied to protect their homes.

“We are doing short potty breaks with our dogs outside, no more than a couple minutes, and ensuring that everybody has clean food and water and are kept inside and well ventilated areas otherwise. Remember to wipe paws after animals come in so that they don’t lick the ash inside. If you can wipe them with a towel after they come in, that’s also recommended.”

It reminded the public that animals have “no idea what’s going on,” so they may be restless and have anxiety.

“As best as you can, keep clean water and food available for them at all times. You would not want to eat ash-filled food or water, and neither do they. Ash can be incredibly dangerous for animals and cause eye ulcerations among other things.”

It said it is working with the country’s agriculture ministry to keep a registry of all reported animals.

“We want to thank everyone for their outpouring of support, kind words, and compassionate vibes. It’s been a very busy and heavy 48 hours and our thoughts are with the people and animals of our beautiful island nation.”

The Trinidad and Tobago Society for the Prevention of Cruelty to Animals (TTSPCA) contacted the VSCPA via Facebook to see how it could help.

Donations can be made here: https://bit.ly/329tjXj