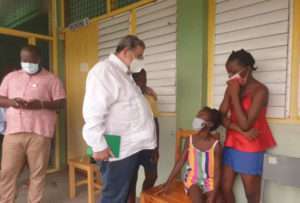 (CMC) — Prime Minister Dr Ralph Gonsalves today made an impassioned plea for assistance for the homeless as the authorities continue to put measures in place to deal with the impact of an erupting La Soufriere volcano.

Gonsalves, speaking at the daily news conference aired on the state-owned NBC Radio, said that there were many homeless people living on the streets of the capital and urged members of the population to assist in their care.

“You know we have had a few of them around Kingstown and the ash would be making life difficult for them and it is an important category which has been identified and we have to take care of all human beings.

“But I would say to persons if you know such individuals take them to a shelter please, help in that way, be a good Samaritan because a lot, a lot of people are stretched doing a lot a lot of things. So, I want to urge initiatives in that way also,” said Gonsalves, noting that the state cannot do everything regarding the disaster alone.

He said all hands must be on deck as the country deals with the catastrophe.

So far there have been no reported casualties as a result of the eruptions caused by the volcano that last erupted in 1997.

But the lead scientist, Professor Richard Robertson, who also spoke at the daily news briefing, said that over the past few hours the pattern has changed “slightly” at the volcano.

He said since late Sunday evening the pattern has changed where “you still having that episodic behaviour but the duration of the episodes and the space between them change…so the episodes have become shorter”.

He warned of pyroclastic density currents (PDCs) going down multiple valleys on the volcano and “what we can see they reach further down valleys than we have seen.

“I would not be surprised for example if when we go to check…that ….one went as far as the coastline,” Robertson said, noting that the PDCs destroy everything in their path including trees, homes and buildings.

Gonsalves also the water situation was also becoming a problem and that in some areas including the shelters arrangements have to be made for adequate supplies.

“Persons who are not in the shelters in the Orange Zone are having difficulties in some cases with food and that is something we have to address”.

Gonsalves described as a “double edge sword” the situation that could prevail with the rains.

“The rain coming is kind of double edge sword. The rain, for example, cleans up Kingstown, areas in the Green Zone and the Yellow Zone and puts a damper on the ash. But what the rain does with respect to the water supply, it takes it longer the system to be cleansed because the ash on the hillsides, when the rain comes, washes the ash …down into the catchment areas and into the rivers”.

Gonsalves said that this would delay the full resumption of services.