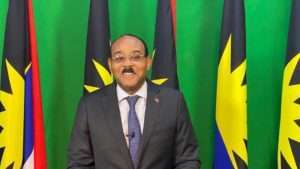 (CMC) – Prime Minister Gaston Browne has sought to downplay opposition concerns over remarks he made regarding the persons being evacuated from St/ Vincent and the Grenadines where the erupting La Soufriere volcano has resulted in several people being evacuated to neighbouring Caribbean islands.

Browne said that the statement he made in which he urged his St Vincent and the Grenadines counterpart, Dr Ralph Gonsalves, to send pretty Vincy women, was merely a light banter.

“As usual, the [United Progressive Party] opportunists and propagandists who are seeking relevance clearly are accentuating an exchange of levity on social media; something that is of absolutely no consequence,” Browne said

“At the end of the day, we’ll be accommodating hundreds of Vincentians, young, old male, female, but these UPP people are uncontrollably embittered, and they evidently need to get a life.”

The Women’s Forum of the UPP (UPP-WF) issued a statement on Sunday saying that it “strongly condemns the Facebook remarks made by Prime Minister Gaston Browne regarding the women of St Vincent & The Grenadines”.

The UPP Women’s Forum said it considers the statements to be “vulgar, demeaning, sexist, and inappropriate”.

The opposition group said that but more importantly, “at a time like this, when the people of that nation are vulnerable, anxious, in peril, and are likely to be displaced, the Prime Minister’s comments are inexcusable.

“Mr. Browne’s words were neither funny nor light-hearted, and we are disgusted that the head of government would behave in this manner,” the release said, noting “the Women’s Forum views his statements as predatory and an encouragement of the men of our Nation to see women as ‘prey’ and as sex objects.

“Were the situation reversed, with Antiguans and Barbudians invited to accept refuge elsewhere, would we not want to be assured of a haven that is safe and honourably intended?”

The UPP-WF said it was therefore urging residents, including religious and civil society leaders “to condemn the Prime Minister’s remarks and actions that might result from them, since they set an un-Christian and dangerous example”.

Browne reiterated that the opposition remains “uncontrollably embittered by the failures and frankly speaking need to get a life,” he said, adding that “this press release is just inconsequential and totally irrelevant”.