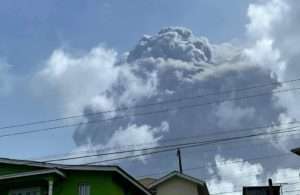 (CMC) – The Trinidad-based Seismic Research Centre (SRC) of the University of the West Indies (UWI) today reported a “large explosion” at the La Soufriere volcano.

In a brief update posted on its website, the SRC said that its team monitoring the volcano, which erupted last Friday, “has observed a large explosion at approximately 4:15 am (local time) and pyroclastic density currents(flows) have been observed on the flanks of the volcano”.

The SRC said that it is continuing to monitor the situation and will update later.

Volcanologist Professor Richard Robertson yesterday warned that the ongoing eruption of La Soufriere volcano is in keeping with the events surrounding the 1902 eruption which claimed 1,600 lives at a time when early warning systems and evacuation capabilities were not as advanced.

Speaking on the state-owned NBC Radio, Professor Robertson, the lead scientist monitoring the volcano, said that while most people know of the 1979 eruption, what is currently happening at La Soufriere is more akin to more a century ago.

“The activity pattern we have currently is more similar to a 1902 type of eruption of that kind of scale, rather than a 1979 scale. The people who lived through 1979 know the kind of eruption we have had.

“What does that mean? It means, unfortunately, that it is likely going to cause more damage and destruction to St Vincent but it also means that there will always be a safe place in the south of the country, which might have a lot of ash every now and then, but you can still sustain life and limb and it would not — which is what we all worry about — get so big that it destroys the whole country. That currently doesn’t seem to be the case.”

The volcano last erupted in 1979 with no casualties. But in 1902 more than 1,000 people died when the volcano erupted.