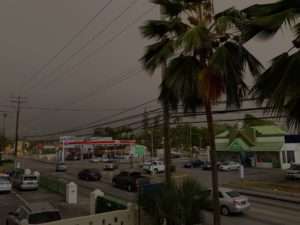 (CMC)— The Director of the Trinidad-based Seismic Research Centre at the St, Augustine campus of the University of the West Indies (UWI), Dr Erouscilla Joseph, Sunday said that Barbados should be prepared for ash emanating from the La Soufriere volcano in St Vincent “for days to weeks” in the first instance.

“Unfortunately the worst case scenario is that this can go on for weeks because of the changes in the dynamics of the system. We just have to kind of keep monitoring the seismicity associated with the volcano and advise based on that,” she told a news conference at which Prime Minister Mia Mottley has urged Barbadians “not to panic” as a result of the tremendous amount of ash falling on the island since the volcano began explosive eruptions last week.

The UWI official said that given the previous eruption, which lasted six months to a year, “the long term span of the eruption in terms of the worst of it could be days to weeks”.

Volcanologist, Professor Richard Robertson, Sunday warned that the on-going eruption of La Soufriere volcano is in keeping with the events surrounding the 1902 eruption, which claimed 1,600 lives at a time when early warning systems and evacuation capabilities were not as advanced.

Speaking on the state-owned NBC Radio, Professor Robertson, the lead scientist monitoring the volcano, said that while most people know of the 1979 eruption, what is currently happening at La Soufriere is more akin to more a century ago.

“The activity pattern we have currently is more similar to a 1902 type of eruption of that kind of scale, rather than a 1979 scale. The people who lived through 1979 know the kind of eruption we have had.

“What does that mean? It means, unfortunately, that it is likely going to cause more damage and destruction to St Vincent but it also means that there will always be a safe place in the south of the country, which might have a lot of ash every now and then, but you can still sustain life and limb and it would not — which is what we all worry about — get so big that it destroys the whole country. That’s currently doesn’t seem to be the case.”

Dr Joseph told the news conference that this particular eruption while showing “effects or characteristics as the 1979 and the 1902 eruptions, in terms of both associated with ash falling and pyroclastic density current, which in the past has been called pyroclastic flows and surges…however what is different about this one these jetting and the height of the ash column that are being generated.

“This would not have been seen in the previous eruptions…and this is why unfortunately Barbados is being affected in the way it is right now by the ash and of course the volume of ash that is being generated from these vertical eruption columns,” she added.

Prime Minister Mottley said that while it is understandable for Barbadians to be worried about the amount of ash falling on the island “we do not need to panic”.

“We certainly do not need to do things that escape common sense. The one theme through this is going to be is that we are going to fight this with common sense. It may need a few cents and dollars too, but the first thing that we need is common sense.”

She said that she had already spoken to the Barbados Light and Power Company regarding the situation last Thursday “and they have taken a number of precautionary steps” and during the news conference the managing director of the sole utility company, Roger Blackman, said the ash fall has so far caused no major problems here.

But he urged consumers to be aware of the possibility of electrical sparks, which they must report as quickly as possible to the relevant authorities.

The Barbados Water Authority also said that its equipment and operations had not been affected by the volcanic ash.

Mottlety told reporters that the authorities have “already taken some steps” to deal with the situation, adding “it is one thing for me as Prime Minister to tell you I don’t know but in these matters I have taken the advice of scientists and I believe that the country must also benefit from the advice I have taken”.

She warned Barbadians to be extremely careful when removing the ashes from their roofs and other places, given that several accidents can occur as people undertaken the cleaning up operations and the ash makes the place slippery.

“It is the first for us in recent time in having to deal with the scale of the ash fall that we have had to.” Prime Minister Mottley said, recalling that ‘as a young child I would have remembered the eruption in 1979 and the extent to which the ash just literally …came into the glasses (while we were eating outside).

“I have no recollection of it being as comprehensively hazardous to the country as I see now,” she added.