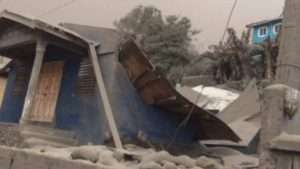 (CMC)— The lead scientist monitoring the eruption of the La Soufriere volcano, Professor Richard Robertson is predicting that more damage from ash should be expected in coming days.

Robertson was speaking on local radio on Sunday in the aftermath of reports that the roofs of several homes and other buildings in the red zone – the area for which evacuation has been ordered, have collapsed.

He also said that in the previous 12 hours, there have been continued episodes of tremors at the volcano.

“They last about 20 minutes and there is an interval between them, ranging from 1.5 to three hours.”

The periods of tremor seem to be associated, based on visual observation, with periods of explosive activity or enhanced venting.

“And that has been going on for the whole night. It is continuing now as we speak,” he said.

He said that since midnight Saturday, instrument began recording volcano-tectonic (VT), as had been the case before the explosive eruption.

“From what we could see and from all reports, the result of all these explosions and all these venting is that you have had a lot of ash dumped in areas occupied in St Vincent.”

CMC has independently verified that ash had fallen as far south as Kingstown, the nation’s capital.

Meanwhile it’s also reported that ash has fallen in St Lucia and Grenada.

Robertson also warned that the weight of the ash on the natural vegetation and buildings is very heavy.

“And probably, the roofs are going to fail and you are going to have a lot of property damage….that is simply because of the ash. That is unfortunate but I suspect that as you go further south, it is going to be less of an impact, but certainly, the environment has been damaged badly by the heavy ash fall.”

Also speaking on Sunday’s programme was Prime Minister Dr Ralph Gonsalves who urged people who are still living in the active zone of the La Soufriere volcano to leave the area immediately.

“We are very concerned about you, we love you very much, we want you to come out and be in the shelters,” he said.

And Finance Minister Camillo Gonsalves in a statement late Saturday said while the immediate evacuation from the red zone was “somewhat chaotic” it was largely successful.

“Conditions in the shelters are very uneven. Some are adequate, others less so. We were probably two weeks too slow in acquiring additional cots, so a few thousand cots are still in Miami awaiting clearance to fly down (ash has closed airspace) as such, many people are sleeping on the floor. That situation is slowly being resolved with donations and makeshift solutions.”

He added that about 20,000 people will be internally displaced for up to three or four months as historically, the volcano keeps going intermittently for a couple months.

According to Gonsalves, the spread of COVID-19 is a huge underlying threat “given the conditions in which people are housed.”

“Other islands are offering accommodations but requiring vaccination first. Most people in the rural north have been vaccine sceptical. This will complicate matters tremendously, and likely lead to big outbreaks,” he said.