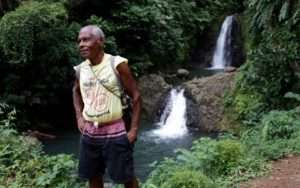 (BBC) – Beyond Grenada’s picture-perfect beaches, the Caribbean nation is a nature lover’s paradise of lush rainforests, crashing waterfalls and soaring mountain ranges. For the past 60 years, those who ventured deep into the wilds of the Grand Etang Nature Reserve in Grenada’s interior were likely to spot Telfor Bedeau as he hiked its many trails and pathways.

Known as “the Indiana Jones of Grenada”, Bedeau is something of a nationwide celebrity. He has walked, rowed and mapped nearly every nook and cranny of Grenada’s rugged terrain, covering 16,093km and climbing its highest peak, Mount Saint Catherine, a staggering 217 times. His love and knowledge of the island’s unique natural habitat is perhaps second only to his thirst for adventure, which has led him to circumnavigate the nation’s eponymous main island non-stop in a kayak, as well as sailing around it twice in his self-built sloop (a single-mast sailboat).

Bedeau has only lived away from the island once, in 1958, when he travelled to England on an ocean liner after being inspired by the Dickens and Shakespeare his grandmother encouraged him to read as a child. Working for British Rail in London, he found the climate too cold and returned home a year later to pursue what he loved: sailing around Grenada’s shores; diving to explore its underwater worlds; and above all, hiking through its seldom-explored rainforests.

Bedeau started keeping a record of his journeys in 1962, creating maps and logbooks of previously uncharted territories. His reputation as a great explorer spread island-wide and beyond, and in 1989, he was asked to work as a guide by the Grenada Tourism Authority.

In recent decades, Bedeau’s expertise as a guide has become legendary, and people have travelled from all over the world to walk with him through Grand Etang’s dense, mountainous landscape, relishing the opportunity to see Grenada through his eyes. Bedeau knows every plant, animal and waterfall, and is able to point out ancestral paths forged by the runaway Maroon enslaved people who escaped to Grenada’s forests to hide from their British colonial oppressors in the late 18th Century.

Now in his 80s, Bedeau’s maintains his spirit for adventure, but his knees are not what they used to be. In the coming months, he plans to cease his guided tours and will retire to the Grenadian island of Carriacou where he has built himself a small home. However, he has no plans to slow down and will carry on hiking and kayaking on his own as much as possible.

“I intend to spend the rest of my little bit in Carriacou in my little hut,” Bedeau said. ” I am 81 and you never know what will happen to your body, [but] I am happiest hiking, kayaking and tending my garden. This is what I will carry on doing as long as my body will allow.”

Bedeau has placed his extensive knowledge in the trusted hands of his protege, Simon Green. A devoted student and friend, Green is now guiding people along Bedeau’s original trails, as well as painstakingly scanning the freehand topography maps, diaries and logbooks Bedeau created over the decades.

“When Telfor began walking, a lot of the interior was still not populated, and the local people did not see the value in walking through it, thinking it was raw, a forbidden place. He was a pioneer and thanks to his dedication, attitudes changed.” Green said. “By the 1990s, the authorities realised the importance of Telfor’s work and a new era of eco-conscious tourism began in Grenada.”

Bedeau has never owned a computer and has always produced his logs – and even his adverts for his services – by hand. By digitising his mentor’s work, Green hopes that Bedeau’s discoveries and observations may be shared with future generations.

When asked what makes him happiest, Bedeau says he has lived by the wisdom his beloved grandmother gave to him as a small boy. Be a good human being, love nature and appreciate the world and the environment around you.