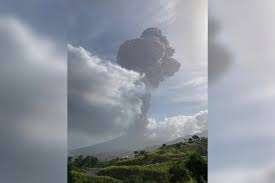 (GLOBAL NEWS) – The La Soufriere volcano in St. Vincent has erupted, spewing ash and lava in a dramatic event that followed a declaration of disaster in the Caribbean nation.

The “explosive eruption” began at 8:41 a.m. on Friday, according to the University of the West Indies Seismic Research Centre (UWI-SRC). The centre had warned about alarming seismic activity at the volcano only a day prior.

“All persons in the Red Zone are asked to evacuate immediately!” St. Vincent and the Grenadines’ National Emergency Management Organization (NEMO) said in a statement on Friday morning.

Initial photos from the scene show a towering column of ash reaching up into the sky from the peak.

Roughly 6,000 to 7,000 people were told to evacuate from the area around the volcano on Thursday after officials issued a red alert about an imminent eruption. The nearby islands of Barbados and Antigua, among others, have agreed to take in evacuees.

The volcano sits on the largest island of the St. Vincent and the Grenadines chain in the Caribbean Sea.