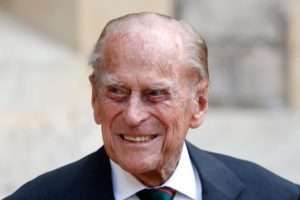 (YAHOO STYLE) – The Duke of Edinburgh has died aged 99, Buckingham Palace has announced.

The Palace said in a statement: “It is with deep sorrow that Her Majesty The Queen has announced the death of her beloved husband, His Royal Highness The Prince Philip, Duke of Edinburgh.

“His Royal Highness passed away peacefully this morning at Windsor Castle.”

The Palace said more announcements would be made and added: “The Royal Family join with people around the world in mourning his loss.”

Tributes have poured in from around the world, led by Boris Johnson, the Prime Minister, who said he had “helped to steer the Royal Family and the monarchy so that it remains an institution indisputably vital to the balance and happiness of our national life”.

He said: “He [Philip] was an environmentalist, and a champion of the natural world long before it was fashionable.

“With his Duke of Edinburgh awards scheme he shaped and inspired the lives of countless young people and at literally tens of thousands of events he fostered their hopes and encouraged their ambitions.

“We remember the duke for all of this and above all for his steadfast support for Her Majesty the Queen.

“Not just as her consort, by her side every day of her reign, but as her husband, her ‘strength and stay’, of more than 70 years.

“And it is to Her Majesty, and her family, that our nation’s thoughts must turn today.

“Because they have lost not just a much-loved and highly respected public figure, but a devoted husband and a proud and loving father, grandfather and, in recent years, great-grandfather.”

“Prince Philip dedicated his life to our country – from a distinguished career in the Royal Navy during the Second World War to his decades of service as the Duke of Edinburgh.

“However, he will be remembered most of all for his extraordinary commitment and devotion to the Queen.

“For more than seven decades, he has been at her side. Their marriage has been a symbol of strength, stability and hope, even as the world around them changed – most recently during the pandemic. It was a partnership that inspired millions in Britain and beyond.

“My thoughts are with the Queen, the Royal Family and the British people as our nation comes together to mourn and remember the life of Prince Philip.”

Liberal Democrats leader Sir Ed Davey tweeted: “Prince Philip dedicated his life to our country. We will always be grateful for his amazing service.

“We shouldn’t forget Prince Philip was a much-loved husband, father, grandfather & great grandfather. So our thoughts are with The Queen and the whole Family at this difficult time.”

Justin Welby, the Archbishop of Canterbury, said in a statement: “He consistently put the interests of others ahead of his own and, in so doing, provided an outstanding example of Christian service. During his naval career, in which he served with distinction in the Second World War, he won the respect of his peers as an outstanding officer.

“On the occasions when I met him, I was always struck by his obvious joy at life, his enquiring mind and his ability to communicate to people from every background and walk of life. He was a master at putting people at their ease and making them feel special.”

Prince Philip – who was often said to keep a firm grip over Royal Family affairs – retired from royal duties in 2017 aged 96.

Philip, who once described himself as the “world’s most experienced plaque unveiler”, was the longest-serving consort of a reigning British monarch.

He was the oldest-ever male member of the British Royal Family.

He made his final solo public engagement on 2 August 2017 when he met the Royal Marine Corp.

He went on to join the Royal Navy and served with the Mediterranean and Pacific fleets in the Second World War.

He married the then Princess Elizabeth in 1947 and gave up his promising naval career when she became Queen in 1952, following the unexpected death of her father, King George VI.

Since then he has served tirelessly alongside the Queen, who was aged 27 at the time, carrying out thousands of appearances and engagements over nearly seven decades.

He also set up the Duke of Edinburgh’s Award scheme, which in the 1950s was designed to bridge a gap between leaving school and beginning national service.

Over the decades it’s been completed by millions of teenagers and operates in many different countries.

Philip stepped down from his public duties in August 2017 with the full support of the Queen. He did attend the weddings of his grandchildren Prince Harry and Princess Eugenie, in May and October 2018.

He also attended his granddaughter Princess Beatrice’s royal wedding in July 2020, during the coronavirus pandemic, and Lady Gabriella Windsor’s in May 2019.

Philip and the Queen spent more time together than they had for some time during the coronavirus pandemic, living together at Windsor Castle for most of the year.

He had retired to Wood Farm on the Sandringham Estate but moved to be with his wife.

The Duke had faced a number of health scares in recent years after suffering from a bladder infection and a blocked coronary artery.

He also had abdominal and hip surgery in recent years.

He spent four days at King Edward VII hospital in London just before Christmas 2019, on the advice of his doctor and was discharged in time for the usual family celebrations in Sandringham.

In February 2021, he was admitted to the same hospital, on his doctor’s advice, after feeling unwell.

It came after the duke had received the first coronavirus vaccine, and the palace said it was not linked to COVID-19.

He ended up spending four weeks in hospital, which was his longest ever stay, and included a procedure on his heart.

The duke was sent home from the private hospital to recuperate at home, but died in Windsor Castle about a month later.

Funeral plans will be confirmed in the coming days.