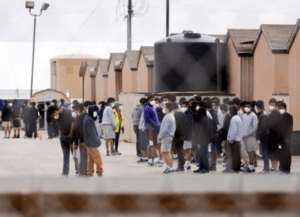 (AFP) — New York state will issue one-time payments of up to US$15,000 to undocumented migrants who lost work during the pandemic under a multi-billion-dollar fund championed by progressive Democrats but opposed by Republicans.

The payments, by far the largest of their kind in the United States, will help tens of thousands of people who arrived in America illegally and who are unable to collect unemployment insurance or federal stimulus checks.

The state’s congress approved the US$2.1 billion “excluded workers” fund on Wednesday as part of a state budget worth US$212 billion for the fiscal year 2022.

The fund far exceeds a similar relief program in California last year, when that state set aside US$75 million for US$500 payments to undocumented migrants.

The New York fund had been pushed by progressive Democrats and demanded by several migrant support organisations during recent demonstrations.

“This is what economic fairness looks like,” tweeted Carmen De La Rosa, a Democrat and assembly member who helped push the measure.

The announcement comes as record-breaking numbers of undocumented migrants cross into the United States from Mexico. Many Republicans have denounced the proposal.

“For the life of me, I’ll never understand why Democrats put the citizens of other countries before the American citizens who elected them and why taxpayers keep voting for them after being constantly abused,” said New York Republican congresswoman Nicole Malliotakis.

Some Democrats representing seats that could turn Republican in elections next year are also said to oppose the fund, according to The New York Times.

New York governor Andrew Cuomo, weakened by a sexual harassment scandal, said that while he agreed to the budget in principle, he was worried about potential “fraud”.

The budget also approved an income tax increase for New Yorkers earning more than US$1 million a year, making New York City’s top tax rate the highest in the country.

Business leaders complain that it might further fuel an exodus of high-earners, many of whom have already left during the pandemic.