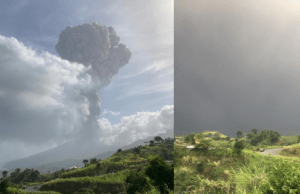 (CMC)— Further explosive eruptions are expected at La Soufriere volcano in the coming days and weeks, following the first on Friday morning, as lead scientist Professor Richard Robertson indicated the largest explosion may be yet to come.

Ash plumes as high as 29,000 feet were recorded after the eruption began around 8:41 am, and Professor Robertson said Vincentians should expect ash falls continuing for days and even weeks to come.

“Once you’re off the mountain, you should be good. I would suggest to you that if you’re still one of those persons anywhere on the mountain saying you’re going to wait it out and see what happens, the first bang is not necessarily the biggest bang this volcano will give,” he said Friday morning. “I would suggest that you move south.”

Professor Robertson, who is leading the team monitoring the volcano which is located on the north of the island, told a press conference around 10:30 am that the volcano went into continuous tremors overnight.

“The batch of magma that had been trying to come up for the longest while, it seems that it either went to the surface or close to the surface and then overnight it punched through and you could say it has cleared the throat of the volcano. After the explosion, the shaking went on for about 40 minutes or so…and it continued roaring, so to speak, for a little while.

“We are now back into a sort of quiet period in between. The explosive eruption…has started and once it has started, it’s possible that you could have more explosions like these. Essentially, there is fresh magma, fresh material, gas which is enough to cause an explosion, very close to the surface, and once that is there it could generate an explosion. The first one might have not necessarily been the biggest one. It is possible that you could have explosions that go higher,” the geologist said.

“We won’t be surprised if this continues for the next few days, the next few weeks,” Professor Robertson added. “It’s necessary for us to watch, monitor it, see whether it’s indicating that in this phase it’s going to get bigger, smaller, whether it’s heading to an end or not, that’s what the monitoring will be doing – collecting more data, trying to analyze them and try to find how to track this explosive eruption.”

He added that in the event there are more explosive eruptions, it would still be the communities in the red zone that would get the brunt of it.

“The rest of St Vincent is probably going to be mainly affected only by ash,” Professor Robertson added, noting that how far the ash goes will depend on the wind direction.

“We have ash clouds reported by pilots between 20 miles north to 50 miles southeast of St Vincent, reaching up to 29,000 feet…once the ash is in the atmosphere it eventually falls back down so areas as far south as Belmont at the observatory here…had some ashfall,” he said.

Late Thursday afternoon he had issued the evacuation order for people living on the north east and north west of the island, after Professor Robertson advised that an eruption could occur within 24 to 48 hours.

Gonsalves reported Friday morning that about 4,500 persons had been moved in minibuses, private transportation and ferries to safe zones, and there were about 2,000 people in emergency shelters.

The prime minister said he wants the elderly and sick to be placed in guesthouses, hotels and private residences, rather than be kept in shelters.

Gonsalves further reported that two cruise ships had already arrived to take people to the neighbouring Caribbean islands that had agreed to take in evacuees.

Royal Caribbean and Carnival cruise lines have promised five of their vessels.

However, Gonsalves stressed that the cruise ships would only be transporting people to other islands, as they did not have enough personnel to keep people on board the vessels.

The Chief Medical Officer will identify those persons who are vaccinated against COVID-19, which is a requirement for people to get on the ships.

Gonsalves said the governments of Dominica, Grenada and Antigua had indicated they would be ready by Sunday or Monday to accept evacuees.

“Places have been closed up – hotels and guest houses, for instance, and they have to clean them up and put them in a state of readiness,” he explained.

The Vincentian leader became tearful as he spoke about how people in the Caribbean had been responding to the plight of Vincentians.

“It is very touching that there are families in Antigua and Grenada and St. Lucia and Dominica who are calling in and saying that they will take people, if need be, into their homes. Amazing, eh? On this dangerous road to Jericho, we have the Good Samaritans.

“I love this Caribbean,” an emotional Gonsalves said.