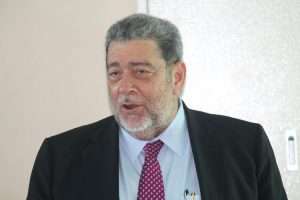 He said while his government has held things together economically “through all kinds of difficulties”, there is now “a real pressure on”.

“We saw in the first month in January… revenue collections drop by $15 million. We recouped in February. Things are even-steven between February this year and February last year. But we recouped because there were a couple of big alien landholding licence transactions in Mustique, where we collect for each of those big transactions… roughly 17 per cent of the value and they were very big ones.

“There are a couple more in the pipeline. In fact… I have to call the people to expedite because it means money – I’m talking about the public servants… to get these things quickly,” Gonsalves said.

He made the comments as he again appealed to public sector workers, and residents generally, to get vaccinated against COVID-19.

So far, the government has administered 11,000 doses of the vaccine, which is about 11 per cent of the population. Officials were hoping that approximately 50,000 people would have gotten the jab by this month, vaccine availability permitting.

Last week, the Gonsalves administration announced a ‘vaccinate or test policy’, which requires that public sector workers either provide proof of vaccination, or subject themselves to testing up to once every two weeks.

But the government is facing opposition from public sector unions, which say the policy offends the Constitution, an argument that the prime minister, a lawyer, rebutted on Wednesday.

“You know, I just don’t understand this thing that for somebody to take a test on you, a simple test, … a rapid test [to determine] whether you have COVID-19 or not, that that is an unacceptable and unreasonable invasion of your individual rights and freedoms. It doesn’t make any sense in fact or in law,” he said.

Gonsalves pointed out that the British government announced that come June, it will implement a traffic light system for travel by nationals. Green would indicate the countries to which British nationals can travel and red, the countries they cannot travel.

“Interestingly, one of the critical considerations is the extent of the vaccination in the [destination] country,” he noted.

Virgin Atlantic is scheduled to begin flying to St Vincent in June.

“If we are not on that green list there, the likelihood is that it will not come. This is a very serious matter about lives and livelihoods,” the prime minister said.

He said his government has tried to cushion the blow of the harsh economic consequences of the COVID-19 pandemic, but said “it’s rough on a lot of people”.