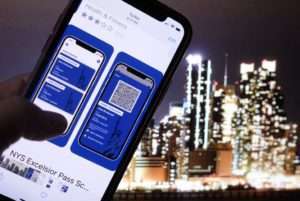 (AFP) – As the United States’ vaccination campaign accelerates, so-called vaccine passports are gaining traction despite political divisions and a fragmented health care system that complicates the centralisation of data.

Asher Weintraub, 17, was happy to show off the new digital New York state “pass” that he downloaded to his smartphone, which, via a QR code, certified that he was vaccinated against COVID.

“I think it is a good thing, you don’t have to like provide all (sorts of) forms and documents each time,” he said, displaying his code at the entrance to one of the first indoor concerts in Manhattan since March 2020.

Led by Democratic Governor Andrew Cuomo, New York is the only American state to have launched such a pass, which is voluntary and has been done in partnership with IBM.

Still not widely used, it immediately verifies whether the carrier has received the vaccine or has recently tested negative for the disease.

Other state leaders have firmly rejected the idea.

The orders effectively bar businesses from requiring that customers show a certificate.

“People have certain freedoms and individual liberties to make decisions for themselves,” DeSantis said.

The Republican governor of South Dakota, Kristi Noem, described vaccine passports as “one of the most un American ideas in our nation’s history,” on Twitter.

President Joe Biden’s administration intends to stay out of the controversy. On Tuesday, White House spokeswoman Jen Psaki said there would be “no federal mandate requiring everyone to obtain a single vaccination credential.”

She said Washington would instead issue guidance to ensure systems “are not used against people unfairly,” with regards to privacy and security concerns.