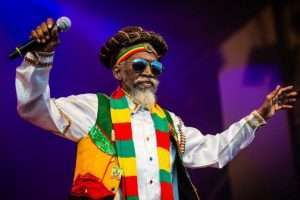 (URBAN ISLANDZ) – Bunny Wailer has yet to be laid to rest as his children are now coming forward about what’s been unfolding behind the scenes.

The drama surrounding the estate of the late Bunny Wailer has taken a bizarre twist as the family says that their father, even in death, is being held at ransom by unnamed sources. Son of the late reggae icon, Abijah Asadenaki Livingston, took to social media to share his frustration as he says the family is unable to wind up his father’s estate because they have not received a death certificate which is being held up because hospital bills are still unpaid for the legendary artist.

On Sunday, the Jamaica Gleaner ran a story which says the legendary Reggae singer alleged that the family has not received the death certificate of Bunny Wailer born Neville O’Riley Livingston because it is being held up over “the signing of a record deal which is said to be the only way to free up funds needed to cover unpaid hospital bills.”

The article did not quote the source of information but said that beneficiaries say their father’s estate was cloaked in a shroud of secrecy, and they were told that there wasn’t enough money to offset his funeral expenses.

Bunny Wailer is survived by his 13 children, who all submitted the joint statement to the Gleaner that questioned whether the information that their father had no money is true and said that believe that “there [should be] no reason for there to be outstanding hospital bills since 2020.”

The family further said, “We should not have to sign a record deal to bury our father. The truth is, however, Bunn Wailer’s legacy speaks for itself.

The statement also said Wailer’s manager during the time he was alive, Maxine Stowe, who was also his caregiver up until his passing, “has no authority whatsoever as it relates to our father’s estate.”

Abijah Asadenaki Livingston posted on his Instagram account that he wanted to “shed light o the troubling situation” surrounding his father and the state of his medical bills and funeral.

Where Is Bunny Wailer’s Royalty

According to the younger Livingston, up to the time his father was alive, he had been receiving over 25 million dollars from just one of his royalty distributors. According to him, this information was hidden from the family until recently.

“Neville O’Riley Livingston’s 2020 tax return from Soundexchange Inc. reveals a gross annual income of USD $203,095 equivalent to over $JMD 25,000,000. This is the total from monthly deposits and represents the income from just one of his several royalty distributors. When we discovered this information we were shocked as it did not reflect the narrative being told to us, but we now understand why our requests of transparency had never been fulfilled,” the son said.

According to the younger Livingston, Wailer’s former manager, Maxine Stowe, is the only person other than my father with access to his accounts. He went on to say that Stowe was questioned on May 4, 2021, about their father’s February Royalty, and she had “assured” the family that “it along with all future collections would be managed by Jah B’s local and international lawyers and kept in an escrow account.”

Abijah went on to say that follow-up checks with the lawyers locally told a different story. “When the lawyers were contacted, the local lawyer responded that ‘he is not in possession of any documents dealing with the assets of Neville oRiley Livingston deceased.’ The US based attorney stated that he has no access to the soundexchange Inc. deposits.”

The family says they further went to Soundexchange directly to enquire about their father’s royalty payments. “We contacted Soundexchange on March 25th and were informed that they made direct deposits of $10,174.41 USD on February 26 and $30,005.61 on March 25th 2021 to the same account they’ve always deposited to,” he said. “Since then we have made several attempts through our attorney to get clarification from Ms. Stowe through her representative Roderick Gordon as to the whereabouts of these funds; which can cover my father’s $5, 275,763.61 JMD or $35, 545.46 USD medical bills. We still have not received a reply from either Ms. Stowe or her attorney to this day.”

According to Abijah, his response is in reply to the disclosure of his father’s outstanding bills. He went on to drop several bombs as he said services unrelated to his father had been racked up under his father’s name by Stowe.

“My father’s US based attorney sent us the estate bills detailing my father’s medical and legal costs which included medical costs incurred since last year namely “Diamed” from July – October 2020. The bill somehow included overdue balances for Maxine’s lawyer Roderick Gordon and Claude Mills as PR who has been writing biased articles in a local online outlet.”

Meanwhile, Abijah says he is not against a deal with VP Records, as reported by the Gleaner. The Gleaner article quoted RAS Records founder Gary Hielfarb also called Dr. Dread, who said that the family should make an effort to maintain the dignity of the late singer, and he recommended that they sign the VP Records deal.

“This deal is a quick solution. Bunny needs to be laid to rest in peace. It’s not like the company will own the rights to his catalogue. The hospital needs to be paid, the funeral home needs to be paid, and the only thing I am seeing now is this deal that will enable Bunny Wailer to get a proper, dignified burial,” he said.

However, Abijah, who says he was named executor in his late father’s will, says that “I cannot blindly sign any agreement concerning his intellectual property without reviewing the details of the contract especially knowing how protective my father was of his works. After several requests, neither my attorney has received a copy of the contract for review,” he said, and added that “while VP patiently awaits a resolution, other parties involved have been pressuring me to sign an approval document without seeing the contract,” he said.

Abijah further said the embarrassment and humiliation the family has faced regarding the bills and burial of his father “seems to be a calculated plot,”

He added that the family is now united as they take care of the younger siblings left by the singer, including a thirteen-year-old daughter.

One of the late singer’s daughters who spoke to The Gleaner says that the predicament faced by the family is a cruel twist of irony as they never expected this to happen to their father.

Cen’C Love, who is also an artist, said, “In my lifetime, I have seen my father pay hospital bills and funeral expenses for hundreds of people and to think that today is one month since my father’s body is in a freezer, and we still can’t get the death certificate. We have been going through the same thing for weeks. It’s like he’s dead and in chains. My father doesn’t deserve this,” she said.

On the other hand, The Gleaner said it reached out to Maxine Stowe, who said she did not want to go into any details and asked not to be quoted. “I already said I could only be addressed through my attorney,” the Gleaner quoted her as saying.

The rift between the former manager and the Livingston family began shortly after Wailer’s death as the bills piled up and the hospital, Medical Associate that treated him until his death, threatened to reveal the late singer’s bill to the public. The family alleged that even a month after their father’s death, Stowe was still in charge of their father’s bank accounts.

Even as the family wait to have his birth certificate released, which will only happy once they satisfy their debts to the hospital, the family is still in a state of turmoil as they look for the singer’s late wife, Jean Watt, who went missing in 2020 and has not been seen since.

Wailer is a three-time Grammy Award Winner and was a founding member of the iconic reggae group ‘The Wailers’ with Bob Marley and Peter Tosh, who are both deceased. At the time of his death, Wailer was 73 years old, but he had had several health issues, which included a stroke in 2018 and a second stroke in July 2020 that left him less mobile. He died on March 2 at the Medical Associates Hospital in St. Andrew.