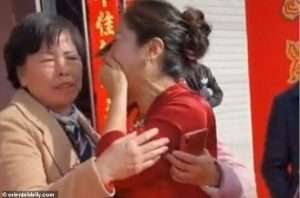 (DAILY MAIL UK) – A woman discovered her long-lost daughter was her son’s bride on their wedding day in China.

The woman was reportedly able to recognise her daughter, from whom she had been separated from many years ago, by a birthmark on her hand on the day of the ceremony.

The bride and her mother were seen crying and embracing one another during the surprise reunion in Suzhou, Jiangsu province on March 31, as reported by Times News Now.

The wedding was able to go ahead after it was established that the woman’s son had been adopted, meaning they were entirely unrelated to each other.

The woman had reportedly decided to adopt a son after searching in vain for her daughter for years.

According to Times Now News, the groom’s mother noticed the birthmark on the bride’s hand.

She was prompted to ask the bride’s parents if their daughter had been adopted.

The parents were taken aback by the question before saying that they had adopted the child after finding her by a roadside over 20 years ago.

On hearing the story, the bride burst into tears and described the moment of meeting her biological mother as ‘happier than the wedding day itself’, the publication reported.

The wedding was able to go ahead despite the shocking revelation and the couple exchanged their vows.