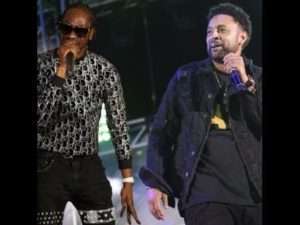 Shaggy and Bounty Killer have made it onto a list compiled by Billboard magazine, placing them among other acts who had a fantastic 2001 and landed on the 100 Greatest Songs of 2001 list. The Billboard Magazine is marking the 20th anniversary of songs released in the year 2001, which they described as “alternately smooth.”

Shaggy’s “It Wasn’t Me” featuring RikRok has already been making moves, being a platinum-selling, chart-topping single. But on top of that, the song is now Billboard’s 11th greatest song of 2001, making it just outside the top 10.

The song was produced by Sting International and is regarded as Shaggy’s international breakthrough.

No Doubt and Bounty Killer’s “Hey Baby,” also made the list coming in at number 31.

“Recorded largely in Jamaica, its dancehall-centric sounds felt like a natural next step beyond the group’s ska roots, and the presence of dancehall legend Bounty Killer on this raucous hit provided an appropriate hat tip to the genre,” Billboard wrote.

The elated Bounty Killer reacted to the news by posting on Instagram: “Tell some man to gwan put in the work bcuz it’s a mighty long way to go. Congrats to my bredda @direalshaggy @slyrobbietaxigang @nodoubt and myself. 20 years of hard work. Dues still coming in. Give thanks.”

The comments section flooded with commendations and congratulations and, of course, fire emojis.