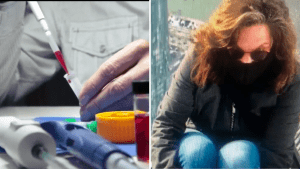 (PIX11) – A Long Island woman who thought it was safe to go without a mask about a month after she got her second COVID vaccine shot learned the hard way that wasn’t the case.

Melanie Rosen, who works as secretary to the athletic director of the Hewlett-Woodmere school district, tested positive for COVID-19, shortly after paying respects to a friend whose father had died.
The friend’s family had traveled from different states to gather in a relative’s house on Long Island.

“There was probably at least 10 family members there,” Rosen recalled. “I hung out for about an hour and a half without wearing a mask. I hugged each one.”

Within a few days, Rosen had a stuffy nose, “and then my legs started to hurt me,” she said.

She called to check on her friend, who told Rosen that three of the family members who’d gathered had tested positive for COVID.

Rosen got tested and, within a few days, she received notice that she was positive for SARS CoV2, the virus that causes COVID-19. An official with the Nassau County Health Department sent an order for her to isolate at home.

“I was shocked,” Rosen said. “I’m the 4.9 percent that got Moderna and actually got COVID.”

The three vaccines currently on the U.S. market — Pfizer BioNTech, Moderna, and Johnson & Johnson — never promised a 100 percent shield against getting the virus. But the shots are extremely vital on the road toward normalcy because they pretty much universally prevent death.

“If we can keep people out of the ICU and they just get a milder case, that actually lowers the mortality,” said Dr. Laila Woc-Colburn, infectious disease specialist with Emory University.

The White House COVID Task Force has been in a race against time to get millions of Americans vaccinated, deeply concerned about a ten percent increase in the daily average of new U.S. infections, now standing at about 60,000 people a day.

The United States recently surpassed 30 million COVID cases, since the pandemic hit last March. There are still about a thousand deaths a day, and Dr. Rochelle Walensky, director of the Centers for Disease Control and Prevention, went off script during a briefing Monday, saying “I’m going to reflect on the current feeling I have of impending doom.”

Walensky went on to say she was concerned about the current trajectory of U.S. cases, saying it was similar to what happened in Italy, Germany and France before recent COVID surges and lockdowns in Europe.

“I’m calling on every, single one of you to sound the alarm bell,” Walensky said this week.

Melanie Rosen is grateful her vaccine shots likely prevented her from getting a more serious form of COVID. She only had a mild bout with the virus.

She feels badly that her positive result required a student who wanted to join the cheerleading squad to quarantine. The teen had filled out an application in Rosen’s office.

For people who are fully vaccinated, she has a word of caution.

“You can still get it; you can probably still spread it,” Rosen said. “I want people to know it’s not over.”