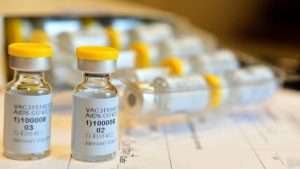 (CMC) — While the AstraZeneca COVID-19 vaccine has been the first to be administered to Barbadians, Prime Minister Mia Mottley on Wednesday night indicated that her government is looking at procuring other brands of vaccines for residents.

Those being considered include the one-dose Johnson & Johnson vaccine from the United States, as well as the Russian-developed Sputnik V and the Chinese Sinopharm vaccines.

Prime Minister Mottley made the disclosure during a press briefing as she responded to a question about the arrival of the next shipment of vaccines.

The first phase of the National Vaccination Programme for COVID-19 ended last week. It saw more than 63,000 people vaccinated with the first doses of the AstraZeneca vaccine. The second doses are to be administered from April 17.

While Mottley declined to give an exact timeline for the arrival of the next batch of vaccines through the COVAX facility, she said 33,000 doses were expected in that first shipment.

“I’m confident that at some point in the next few weeks we will have access to some. As to the exact day, I’m not even going there…We’re learning that there are too many variables that can easily disrupt the supply and logistics chain,” she said.

The prime minister disclosed that Barbados was also in line to receive approximately 60,000 doses of the Johnson & Johnson vaccine through the African Medical Supplies platform. She said the African Union had signed a contract with Johnson & Johnson for the provision of 220 million doses.

As the former Caribbean Community (Caricom) chairman, Mottley said she would have negotiated last year, for the members of the regional grouping to have access to medical supplies and vaccines via that platform. About 1.8 million doses of the one-shot Johnson & Johnson vaccine are to be allocated to Caricom member countries.

She also shared that China had pledged to donate 30,000 doses of its Sinopharm vaccine to Barbados with more available for purchase.

Prime Minister Mottley said once that vaccine is approved by the Scientific Advisory Group of Experts (SAGE), which advises the World Health Organization (WHO) on vaccines and immunisations, then it would be approved for use locally.

Additionally, the Barbadian leader said that while the Sputnik V had not yet been approved by the WHO, it had received favourable reviews in one of the pre-eminent medical publications, the Lancet Journal. Moreover, she noted that it was currently being considered for use in Europe.

She also disclosed that following an “excellent” meeting with the President of Cuba, the vaccine that country has under development could also be added to the list.

“So…the immediate one is AstraZeneca, but we do anticipate that Johnson & Johnson could be part of our mix. We do anticipate that once Sinopharm and Sputnik are approved that they can also be part of the mix. And, we probably will have more than enough AstraZeneca, as I said, to be able to deal with ourselves as well as to ensure that we wait and see what happens, of course, with persons under 18 and [those aged] 16 to 18. I know that they’re working on something that probably won’t be available before the end of summer, with respect to that age group,” Mottley stated.