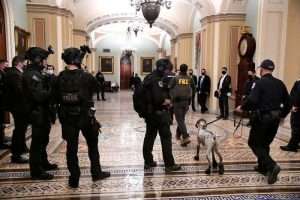 (REUTERS) – Two U.S. Capitol Police officers have filed a lawsuit against former President Donald Trump, saying he incited the deadly Jan. 6 insurrection and was responsible for physical and emotional injuries they suffered as a result.

James Blassingame, a 17-year veteran of the force, and Sidney Hemby, an 11-year veteran, filed the lawsuit on Tuesday in U.S. District Court for the District of Columbia seeking damages of at least $75,000 each.

“This is a complaint for damages by U.S. Capitol Police officers for physical and emotional injuries caused by the defendant Donald Trump’s wrongful conduct inciting a riot on January 6, 2021, by his followers trying to overturn the results of the 2020 presidential election,” the lawsuit said.

Trump has denied responsibility for the rioting, which left five people dead, including a police officer. His office did not immediately return a call for comment on the lawsuit.

The lawsuit cites the former Republican president’s conduct before and beyond the Nov. 3 presidential election, which Democrat Joe Biden won, including comments in speeches, on Twitter and during presidential debates.

The lawsuit also cited Trump’s encouragement to supporters to come to the Capitol on Jan. 6 and “Stop The Steal” in the months after the election, including a tweet on Dec. 19: “Big protest on D.C. on January 6th. Be there, will be wild.”

“Trump’s December 19th tweet about the January 6th rally was taken by many of his supporters as a literal call to arms,” the lawsuit said.