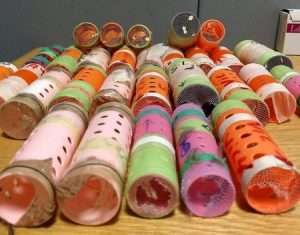 Officers discovered the birds during a secondary baggage examination after the 26-year-old man arrived on a flight from Georgetown on Sunday.

The man, who was destined to an address in New Jersey, was not criminally charged.

However, CBP said it assessed a US$300 civil penalty, allowed the man to withdraw his request for admission, and placed him on a Guyana-bound flight on Monday.

It added that its agriculture specialists quarantined the finches and turned them over to the US Department of Agriculture Veterinary Services.

“Customs and Border Protection officers and agriculture specialists face a very complex and challenging task, and that is to protect our nation, our citizens, our agricultural resources and our economic security,” said Marty Raybon, acting director of field operations for CBP’s New York Field Office. “And they meet that challenge with extraordinary commitment and vigilance.”

CBP quarantined the finches before turning them over to USDA Veterinary Services.