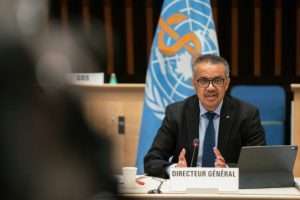 (AFP) — World leaders pushed Tuesday for a new international treaty to prepare for the next global pandemic — and avoid the unseemly scramble for vaccines hampering the COVID-19 response.

Leaders from 25 countries, the European Union and the World Health Organization (WHO) sought to get the ground rules down in writing to streamline and speed up the reaction to future global outbreaks.

The treaty would aim to ensure that information, virus pathogens, technology to tackle the pandemic and products such as vaccines are shared swiftly and equitably among nations.

“The time to act is now. The world cannot afford to wait until the pandemic is over to start planning for the next one,” WHO chief Tedros Adhanom Ghebreyesus told a virtual press conference.

Without an internationally-coordinated pandemic response plan, “we remain vulnerable”, he warned.

The call came in a joint article published in international newspapers on Tuesday, penned by leaders from five continents.

“Nations should work together towards a new international treaty for pandemic preparedness and response,” the article said.

“We must be better prepared to predict, prevent, detect, assess and effectively respond to pandemics in a highly coordinated fashion.

“We are, therefore, committed to ensuring universal and equitable access to safe, efficacious and affordable vaccines, medicines and diagnostics for this and future pandemics.”

Leaders from key world powers including the United States, China, Russia and Japan are not among the signatories so far.

But Tedros said the mood music from Washington and Beijing was positive and insisted it was not a problem that they had not yet signed up.

Tedros hoped to have a resolution squared up in time for the World Health Assembly in May. The assembly is the WHO’s decision-making body, attended once a year by delegations from the UN health agency’s 194 member states.

The push to bolster common efforts comes as the planet struggles to combine forces to overcome the COVID-19 pandemic that has killed almost 2.8 million people worldwide and battered the global economy.

The spread of the virus has seen blame traded between capitals and accusations that rich nations have hoarded vaccines.

According to an AFP count, some 53 per cent of the COVID-19 vaccine doses administered so far have been in high-income countries accounting for 16 percent of the global population.

Just 0.1 per cent have been administered in the 29 lowest-income countries, home to nine per cent of the world’s population.

The WHO said that while the existing 2005 International Health Regulations covered first alerts, travel measures and sharing information on how to break an epidemic, the COVID-19 pandemic had exposed gaps such as supply chains, research and development.

The joint article said the additional treaty should be aimed at “greatly enhancing international cooperation” on alert systems, data-sharing and reasearch to help track rising threats and the production of vaccines, medicines and protective equipment to tackle diseases.

First proposed by European Council president Charles Michel at the United Nations in December, the notion of a treaty has since been endorsed by EU and G7 countries.

“Now it’s time to come together as one global community to build a pandemic defence for future generations that extends far beyond today’s crisis,” EU chief Michel told the joint press conference with Tedros.

The International Federation of Pharmaceutical Manufacturers and Associations lobby group said the importance of incentives to develop tests, treatments and vaccines should be reflected in the treaty.

“The biopharmaceutical industry and its supply chain is part of the solution for future pandemics and therefore should play a role in shaping an international pandemic treaty,” IFPMA chief Thomas Cueni said in a statement.