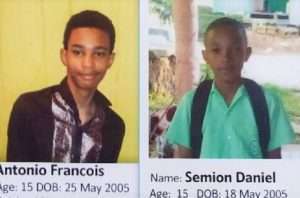 The deceased are Semion Daniel and Antonio Francois.

They were shot dead around 7.45 p.m. at McShine Lands.

The Express was told that the two teenagers were liming with a group of friends in an abandoned house in the area, when they were approached by two masked men.

The men looked at Daniel and Francois and opened fire.

They were killed instantly.

The assailants then looked at the other children and raised their weapons.

However, they did not shoot and spared the group.

The assailants then fled the scene.

Daniel and Francois escaped from one of the Children’s Authority support centres two weekends ago.

CCTV footage viewed by investigating officers disclosed that the boys escaped by passing through burglar- proofing bars in a room on the western side of the building.