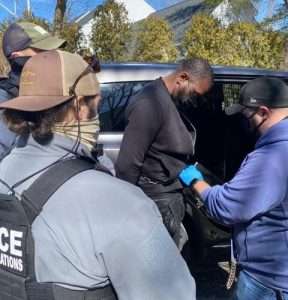 (CMC) — The United States Immigration and Customs Enforcement (ICE) agency on Thursday said that officers from its Enforcement and Removal Operations (ERO) Boston have arrested one of ICE’s Top 10 Most Wanted in the United States — a previously removed immigration fugitive citizen of Haiti who had been convicted on multiple counts of narcotics possession and trafficking.

ICE said Friendly Grandoit, 42, was charged in US federal court, with illegal re-entry into the United States.

Grandoit was arrested on March 19, 2021, and charged with one count of illegal re-entry into the United States after deportation.

ICE said that Grandoit was detained following an initial appearance before US District Court Magistrate Judge Marianne B Bowler.

According to charging documents, in 2005, Grandoit was encountered in pre-trial detention by immigration officials while pending trial on drug distribution charges in Middlesex County, Massachusetts.

Grandoit was convicted in September 2006 of trafficking in a controlled substance and sentenced to three years in prison.

On completion of his sentence, ICE said Grandoit was placed into removal proceedings and deported to Haiti in July 2008.

“Sometime after his removal, Grandoit illegally re-entered the United States.”

In September 2019, it said Grandoit was arrested and charged in Woburn District Court in Massachusetts with distribution of cocaine, identity fraud and operating with a suspended license, and was detained.

But in April 2020, Grandoit posted bail and was released from custody, however, ICE that had filed a detainer with the jail, was not notified.

On March 19, ICE said Grandoit was arrested in connection with this case.

The charge of illegal re-entry provides for a sentence of up to 20 years in prison, up to three years of supervised release and a fine of US$250,000.

Sentences are imposed by a federal district court judge based upon the US Sentencing Guidelines and other statutory factors.