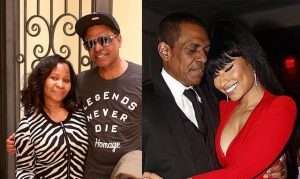 (URBAN ISLANDZ) – Nicki Minaj’s mother, Carol Maraj, is suing the man that is responsible for the hit-and-run killing of her husband, Robert Maraj.

The civil lawsuit is seeking $150 million dollars in damages for wrongful death of the 64-year-old who was struck down while walking across a street in Mineola on February 12. The defendant in the case, Charles Polevich, failed to render assistance and even went to the extent of concealing his actions by cleaning and concealing the Volvo car involved in the accident.

According to police reports, Robert Maraj was walking on a street in Long Island when he was struck. After hitting Maraj, police say that Polevich walked over to the victim and asked if he was okay before he fled the scene. He didn’t call for help or reported the incident to the police.

Maraj’s widow Carol filed the lawsuit on Friday at the State Supreme Court in Nassau County. Civil Rights Lawyer and Activist Ben Crump who is the Attorney representing the Maraj family in the case, says the defendant was irresponsible and negligent, which led to the elder Maraj’s death. He tweeted, “Paul Napoli and I havae filed a $150 million lawsuit in the hit-and-run death of Robert Maraj, @Nickiminaj’s father. Charles Polevich was not only irresponsible & negligent in hitting Maraj, but was more concerned about running away and hiding than seeking help.”

He added, “Polevich’s behaviour was criminal, cowardly, and immoral. We will hold him responsible for his reckless actions that led to Robert Maraj’s death.

Polevich is facing criminal charges, including leaving the scene of an accident that led to death and tampering with or suppressing physical evidence. He had pled not guilty and is currently free on a $250,000 bond.

Meanwhile, Polevich’s attorney Marc Gann has said that an insurance company will handle the civil case but declined to comment further on the case. He, however, said that his client Polevich, 70, had a “tremendous amount of empathy for the family, the loss that they’ve suffered and expressed condolences.”

Gann told TMZ, “The question of whether there was negligence and degrees of negligence will be determined by the court. The $150 million amount seems to be over the top.”