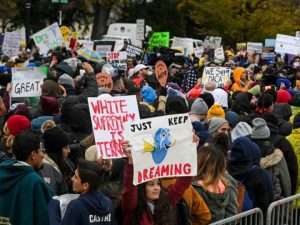 (AFP) — The US House of Representatives passed two immigration bills Thursday that would provide legal status for millions of undocumented immigrants, but the measures have an uncertain future in the evenly divided Senate.

Rather than trying to ram through comprehensive immigration reform similar to the massive effort that failed in 2013 — and during today’s heightened tensions along the US-Mexico border — House Speaker Nancy Pelosi opted for a different strategy.

She aims to coax a pair of more modest measures through Congress and towards President Joe Biden’s desk.

Earlier Thursday the White House endorsed the two bills, including one that offers a citizenship pathway for undocumented young people, known as “Dreamers,” who were brought to the United States as children.

The American Dream and Promise Act passed on a vote of 228 to 197, with support from nine Republicans.

The other formalises the legal status of migrant farmworkers — who the White House notes are “living in the shadows and vulnerable to exploitation” — and offers them an opportunity to earn citizenship.

The Farm Workforce Modernization Act would permit farmworkers and their families to remain in the country, and in many cases become US citizens, through continued employment in agriculture.

It passed by 247 to 174, an even stronger bipartisan margin.

“It is precisely now, during a pandemic, when we need to pass these bills,” Congressional Hispanic Caucus chairman Raul Ruiz said.

And “farmworkers are getting infected and dying from COVID at a much higher rate than the general public. They are literally dying to feed you”.

Pelosi described immigrants as front-line heroes, health care workers and teachers who “strengthen, enrich and ennoble our nation, and they must be allowed to stay”.

The legislation’s success in the Senate, which is comprised of 50 Democrats and 50 Republicans, is in question.

Any immigration bill would need the support of at least 10 Republicans to overcome minority blocking tactics.

Striking a Senate deal on the complex issue looked unlikely, for now, especially with waves of undocumented immigrants including children arriving at the US-Mexico border.

Republicans have warned that Biden’s border policies will only worsen the flow of illegal immigration.

“Our focus needs to be on securing the border and fixing the legal immigration system.”