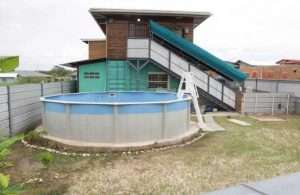 (CNC3) – The Ministry of Education is looking into the operations of the Ethos Speech Therapy School for Children, where a two-year-old student drowned in a pool on Tuesday.

In expressing condolences to the family yesterday, however, Minister Dr Nyan Gadsby-Dolly said the chief education officer and director of school supervision had confirmed that the school “is definitely not registered or affiliated” with the ministry.

“Unconfirmed information suggests that speech therapy classes take place there, but it is not registered by/affiliated with the MOE,” Gadsby-Dolly said.

She said the Ministry of Health had also not yet given approval for the operation of daycares or preschools, which would be the institutions that usually provide care for two-year-old children.

“Therefore, they would be in breach (of the COVID-19 regulations) unless they received special permission.”

She said the ministry is now looking at the operations of the school “to be sure of what exactly is happening there.”

Romelu Amani Drakes would have turned three on April 23. He was enrolled at the school eight months ago. The school, his father said, caters to special needs children, assists slow learners and gives speech therapy.

According a police report, around 9 am the child’s mother Regine Phillip, 26, dropped him off at the school in Esperanza Village, Couva and went to work. Phillip contacted her sister Rene to pick him up from school around noon. But when her sister arrived at the school around 12.15 am she was kept waiting for about 15 minutes. The report stated that she was then called inside by the owner Alicia Bharath, who told her the child fell into the above ground pool. Bharath, the report stated, told her she quickly pulled him out and tried to resuscitate him. Bharath accompanied the sister to the car and they took him to the Couva District Health Facility. He was pronounced dead around 12.50 pm.

Romelu’s father Shion Drakes, 31, is demanding answers from the school. Romelu was his only child and he wants justice. Noting that the swimming pool is not part of the school curriculum, he explained that the upstairs of the building is a dwelling house. The school, he said, has three classrooms and about 18 students.

He said no one from the school had contacted him yet, but he received a call from the Homicide Bureau of Investigations.

An autopsy is expected to be done today at the San Fernando mortuary. Investigations are continuing.