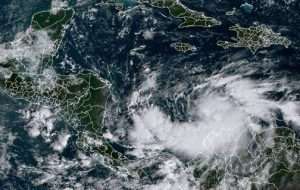 (AFP) — The Atlantic hurricane names Dorian, Laura, Eta and Iota are being retired due to the trail of death and destruction left in their wake, the UN’s World Meteorological Organization said Wednesday.

The four names were wiped off the lists following a two-day virtual meeting of the WMO’s 28-country Hurricane Committee serving North America, Central America and the Caribbean.

“We’ve retired some hurricane names based on the impact on lives and property,” said committee chair Ken Graham, director of the US National Hurricane Center.

During 2020, the unprecedented number of 30 named Atlantic storms led to at least 400 fatalities and cost US$41 billion in damages.

“Considering a record-breaking season during the global pandemic, many lives were saved through this committee’s work,” said Graham.

“It is critical we have a plan, coordinate our efforts, and share challenges and best practices.”

Throughout the annual Atlantic hurricane season, which runs from June 1 to November 30, storms are named to make them easier to identify in warning messages.

Storms are assigned alternating male and female names in alphabetical order — this year beginning with Ana, Bill and Claudette.

They are reused every six years, though if any hurricane is particularly devastating, its name is retired and replaced.

The name lists use 21 of the 26 letters of the alphabet due to the difficulty in finding a balance of six easily-recognisable English, Spanish, French and Dutch names starting with Q, U, X, Y and Z — the languages spoken in the Atlantic and Caribbean regions affected.

If there are more than 21 named storms in a year, as happened in 2005 and 2020, the names would then start going through the letters of the Greek alphabet, starting with Alpha and Beta.

However, from 2021, the Greek alphabet will be replaced by a permanent supplementary list of names, in alphabetical order.

The overflow list of names to be used from now on starts with Adria, Braylen, Caridad, Deshawn, Emery, Foster, Gemma, Heath and Isla.

“There is confusion with some Greek alphabet names when they are translated,” the Geneva-based WMO said.

Dorian in 2019 was the strongest hurricane to hit the northwestern Bahamas in modern records, causing total damage estimated at US$3.4 billion. An estimated 29,500 people were left homeless and/or jobless.

The 2020 season got off to an early and swift start with a record nine named storms across May, June and July.

The season ended late, with two major hurricanes in November for the first time on record.

Laura made landfall in August in Louisiana, accompanied by a devastating storm surge at least five metres (17 feet) above ground level. Laura was responsible for 47 deaths in the United States and on Hispaniola, and more than US$19 billion of damage.

Eta and Iota both made landfall less than two weeks apart during November 2020 on the same stretch of Nicaraguan coast.

In total, 93 names have now been retired from the Atlantic basin list since 1953, when storms began to be named under the current system.

More than a century of temperature and precipitation data, along with decades of satellite data on hurricanes and sea level rises, have left no doubt that Earth’s warming surface temperature is amplifying the impact of extreme weather disasters.