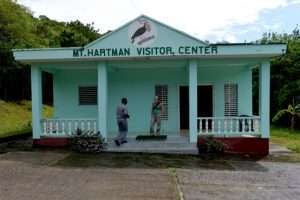 PR – The Forestry Department of the Ministry of  Agriculture, Lands and Forestry has begun a task of gathering necessary data for use in a quest to  help protect and preserve the Grenada Dove and other bird species located at the Mt. Hartman Bird  Sanctuary.

The Grenada Dove, Leptotila Welsi, is endemic to Grenada. During past years, due to situations  like natural and human interference, the population of the bird has dwindled, bringing the total to less than 200 birds. This known fact has sprung the Forestry Department into action, as it is hopeful  that the data collected will provide sufficient information to offer some protection to the existing  population.

A three-member Forest Ranger team will aid in putting the data together that will be used as  sensitization material to be disseminated to the general public, during the protection drive.

Forest Ranger, Shawn Philbert, is participating in this activity.

“Down here is the Dove Sanctuary, so we have to protect the dove. We don’t want any illegal  activities to take place in that area, because that will affect the dove,” he said.

These illegal activities include things like illegal farming, illegal grazing of animals, the cutting  down of trees and hunting outside of the open season.

Philbert said, “If you are going to cut down trees there, what will happen is that the Dove will go  to a next place and you don’t want that to happen because visitors come to the sanctuary to see the  behaviour of the Grenada Dove.”

Another Forest Ranger, Dolland Francis, is asking the public to educate themselves about the  Grenada National Bird.

“Many Grenadians underestimate the importance of our bird. The Grenada Dove can only be found  in Grenada and I think we should do as much as we can and send out much information as we can to protect our dove. People need to understand that when we have something, we should cherish it  because it does not last forever, so if we destroy the area in which it lives, eventually it will vanish  and the generation to come will not know our Dove,” remarked Francis.

“The Grenada National Dove is recognized as very unique, special and shy but people look at the  dove as just a common bird and they do not respect it. That is why a lot of people does not seem  to understand the dove and its behaviour,” said Peter Plenty, Tour Guide and Security Guard at the  Dove Sanctuary.

After the survey is completed, a strategy to control or minimise activities which threaten the  population of the Grenada National Dove will be developed. The information will be processed by  the Forestry Department and disseminated to the general public, so that there can be an ‘all hands on deck’ approach in protecting the area.