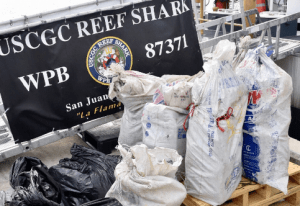 (AFP)— The United States Coast Guard has transferred custody of three suspected smugglers and an estimated US$6.6 million in seized cocaine to US federal agents at Coast Guard Base San Juan, following the interdiction of a drug smuggling vessel in the Mona Passage, near Mona Island, Puerto Rico, in the Caribbean Sea.

The US Coast Guard said on Tuesday that the suspected smugglers are males, Dominican Republic nationals, who now face criminal charges by US Department of Justice prosecution partners in the US Attorney’s Office for the District of Puerto Rico.

“These efforts serve to protect the nation’s southernmost maritime border and our fellow citizens in Puerto Rico and the US Virgin Islands from this nefarious threat.”

The US Coast Guard said the bust occurred Tuesday night, after the aircrew of a Customs and Border Protection Caribbean Air and Marine Branch maritime patrol aircraft detected a suspicious go-fast vessel in international waters just off Mona Island.

“The Coast Guard Cutter Valiant diverted in pursuit and, with the assistance of the cutter’s small boat, successfully interdicted the suspect go-fast vessel,” it said.

Following the interdiction, more than 236 kilograms of cocaine was seized.

“The crew of the Cutter Valiant embarked the three men from the go-fast vessel and later transferred them, along with the seized contraband, to the Coast Guard Cutter Reef Shark for transport and offload in San Juan, Puerto Rico, where CCSF federal agents received custody,” the US Coast Guard said.

It said the CCSF is a multi-agency Organized Crime Drug Enforcement Task Force group operating in the District of Puerto Rico “focusing on Caribbean and South American-based Transnational Criminal Organizations involved in the maritime and air smuggling shipments of narcotics from Puerto Rico to the Continental US and in the laundering of drug proceeds using bulk cash smuggling and sophisticated laundering activities”.