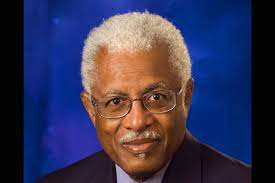 (CMC) — The Central Bank of Barbados on Tuesday confirmed that Sir Courtney Blackman, the Bank’s first and longest-serving Governor, has died at the age of 88.

He passed away in the United States where he had been living for more than 20 years.

“We are immeasurably saddened by the passing of our founding father, Sir Courtney,” current Governor Cleviston Haynes said.

“His vision has been the cornerstone of the Bank since its inception, and his influence is still felt in many of our activities, both economic and social. As Governor, he presided over the Bank’s transformation from a fledgling organization with five employees to an institution with a staff complement of almost 200. He oversaw the introduction of Barbados’ national currency in 1973 and was intimately involved in the July 1975 decision, based on the instability of the British pound, to tie the island’s currency to the United States dollar at a rate of two Barbados dollars to one US dollar, a peg that remains to this day.”

On a personal level, Haynes added, he had the honour and privilege of working under Sir Courtney during his early years at the Bank, and he “had a significant influence on my career and approach to leadership”.

“He was a giant in central banking and laid a solid foundation for the excellence for which the Bank is known,” the Central Bank said in a statement.

“His many other achievements include the construction of our headquarters, his emphasis on public education and public sector management as well as his input in national development that resulted in the creation of the international business and financial services sector, the country’s second largest foreign exchange earner today.

“Sir Courtney was a fervent believer in developing the Bank’s human resources, and under his leadership several employees completed professional academic qualifications, and participated in international conferences and programmes to build out their various competencies,” it added.

An authority on central banking in developing countries, Sir Courtney lectured at major universities in Britain, Canada and the US, including Oxford, Dalhousie, and Columbia.

Sir Courtney is survived by his wife, Gloria, and three sons.