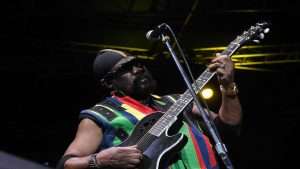 “Got To Be Tough” by Toots and The Maytals has just been announced as the winner of the 2021 Grammy Award for Best Reggae Album. This is the second Grammy win for Toot and the Maytals, having won in 2004 for the album “True Love.”

The legendary frontman for the band Toots Hibbert died at age 77 in 2020. He was widely known for his soulful voice, and he and his band were considered pioneers of the reggae genre. “Got To Be Tough” was the first studio album to be released from the band in over a decade. It was released in August 2020, just a few weeks before Toots’ death. It features 10 tracks, including a collaboration with Ziggy Marley on the track “Three Little Birds.”

This final album was compiled after Toots had taken a hiatus for a few years following an incident where he was hit by a bottle while performing. The album has best been described as “political and a wake-up call,” which seeks to invoke unity among all.

The 63rd Grammy Award is being held at Staples Center in Los Angeles. The other nominees who were up for the award in the category of Best Reggae Album include, The Wailers, “One World,” Buju Banton, “Upside Down,” Skip Marley, “Higher Place,” and Maxi Priest, “It All Comes Back To Love.”