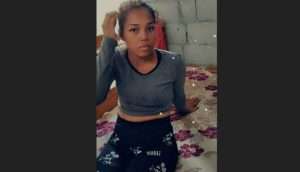 (GUYANA NEWS ROOM) – Police have arrested Kristophe Stoll, a 20-year-old resident of Swan Kuru Kururu, Soesdyke/Linden Highway, in connection with the murder of Kameel Calistro, 19, also of the same village.

Police Headquarters in a statement noted that the young lady was stabbed by Stoll during an argument of “which girl can dance better” at a birthday party in the village at around 03:45hrs on Sunday.

According to the police report, Calistro was at a birthday party for her aunt, Shavon Calistro at Lot 11 Swan Kuru Kururu, where she was imbibing and dancing with others.

It is alleged that at around 02:00hrs, Stoll started the argument about which girl can dance better between Stoll and relatives of the victim. During the argument, Stoll pulled out a knife from his right-side waist and attempted to stab 29-year-old Adolph Joseph, who also a cousin of the victim. Police said Joseph received a minor laceration to the lower left side abdomen.

The victim then intervened and Stoll allegedly stabbed her to the left side abdomen; she collapsed and was rushed to the Georgetown Public Hospital where she was pronounced dead. The body is at the said hospital mortuary awaiting an autopsy.

Police said Stoll was arrested in a highly intoxicated state; a knife was found in his possession. Investigations are ongoing.