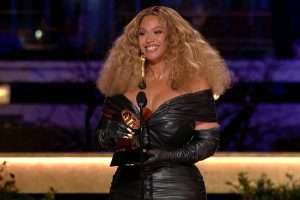 (COMPLEX) – Beyoncé has made Grammy Awards history by winning 28 times.

The Texas-born artist has beat out bluegrass-country musician Alison Krauss, who has 27 awards, to achieve the record for most Grammy Award wins by a singer.

The person with the most Grammy wins is the late conductor Georg Solti with 31. Producer Quincy Jones, like Beyoncé, has 28 Grammy wins.

“As an artist, I believe it’s my job and all of our jobs to reflect the times and it’s been such a difficult time,” Beyoncé said while accepting the Best R&B Performance award for her “Black Parade” track. “So I wanted to uplift, encourage and celebrate all the beautiful Black kings and queens that continue to inspire me and inspire the whole world.”

She continued, “This is so overwhelming. I’ve been working my whole life since 9 years old and I can’t believe this happened. This is such a magical night. Thank you so much.”

In addition to winning Best R&B Performance on Sunday night, Beyoncé also won the Best Music Video award for “Brown Skin Girl” and Best Rap Performance for “Savage Remix” with Megan Thee Stallion. The Lemonade singer entered the night with a total of nine nominations, the most of any other artist.