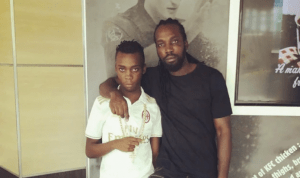 (JAMAICA GLEANER) – The sentencing of Dante Brooks, the teenage son of Jamaican international entertainer Mavado, who was found guilty of murder, illegal possession of firearm, and arson, has been postponed.

Today’s hearing was pushed back after Brooks’ attorney, Peter Champagnie, asked for a postponement after indicating that he needed time to peruse the social enquiry report which was served on him this morning and for the prosecution to make adjustments to the victim impact statement.

The hearing has been moved to March 19 in the Home Circuit Court.

Brooks, 18, and another man, Andre Hinds, were found guilty in January.

Hinds was also charged with murder, illegal possession of firearm, and arson.

Brooks and Hinds, who appeared in court, were remanded by Justice Leighton Pusey.

The two were arrested and charged in connection with the home-invasion killing of Lorenzo Thomas in the St Andrew community of Cassava Piece on June 5, 2018.

Prosecutors led evidence that Brooks and Hinds were among five men who entered the house and shot Thomas before pushing his father into another room.

Thomas’ killers attempted to sever his head but aborted that plan because the machete was too dull.

They then poured gasoline on the house and the body before setting both on fire.

Prosecutors relied on the eyewitness testimony of Thomas’ father, who indicated that he knew his son’s killers from the community.