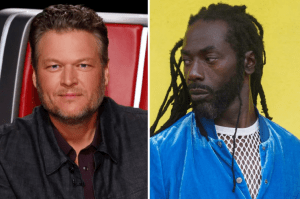 (DANCEHALL MAG) – Episode 3 of NBC’s The Voice Season 20 certainly brought some giggles to Jamaican audiences on Monday night. From the Dancehall legend Buju Banton being mistaken for some kind of ‘warm bread’ to Blake Shelton’s desperate attempt to win over contestant Pia Renee during the blind auditions by highlighting his association with a well-known Reggae aficionado, the jokes just kept on coming.

The moment occurred after the nail-biting, last-minute chair turn when The Voice judges Blake Shelton and John Legend hit their buzzers just mere seconds apart to vie for Pia’s taking. The 37-year-old single mom, who auditioned with the Stevie Wonder tribute to Bob Marley, titled Master Blaster (Jammin’), gave Blake his shot to win her over when she declared, “Reggae has my heart.”

Upon realizing Pia’s passion for Reggae music, Blake pounced on the opportunity to show just how much of a huge fan he had become for “Reggae and Ska”, thanks to the influence of his fiancé and fellow on/off Voice judge, Gwen Stefani.

John challenged him, however, citing that Blake hadn’t the slightest clue for the genre, “One of us knows the music you want to cover and one of us has no clue,” he said.

Blake defended himself nonetheless with an inapt yet hilarious recovery and what he thought would be the secret sauce to snatching Pia from possibly John’s grip, he quipped, “To say that I don’t know anything about the kind of music [Pia] is performing would disqualify the fact that, who knows, by the time this airs, Gwen Stefani could even be my wife by then! She’s delivering twins right now! She’s pushing them out! But I’m here, working.”

A confused John, retorted, “I have no idea what this man is talking about,” but Blake eagerly elaborated, “I’m talking about Gwen Stefani and her stamp on Reggae and Ska music and how much I’ve grown to love it.”

But then John thought-out-aloud, “Wouldn’t it be great if she were here to coach you,” he pointed out to Pia. Continuing to underhand his opponent, John went on to conjure up his own mega ‘association’ to Reggae music with his next question, “Do you like Buju? A thrilled Pia responded, “I love Buju!”

Fellow judge Kelly Clarkson joined in on the banter, “Blake do you know what Buju is?”

“It’s like bread, like a warm bread, like a bujuu…” Blake confidently responded but was cut-off by John who snapped, “No! I happened to do a song with Buju,” referring to either of their two collaborations: Memories (2020), off Buju’s Upside Down 2020, or Can’t Be My Lover (2008).

John eventually won Pia over and she would later explain that Blake’s funny foodstuff flub was what ruined any slim chance he might’ve had of persuading her.

Blake’s extremely amused Voice rival, Kelly Clarkson, also piled on. “Blake trying to use the Reggae/Ska card was maybe the saddest display ever! Still waiting on that Reggae hit from Shelton!” she snickered.

Blake wasn’t that far off in pulling for straws with his Gwen Stefani-card.

Not only is the former leader of the band No Doubt keenly in tuned with Jamaican music and culture from decades back, but many of her songs to date are also dialed with Reggae impressions. Her single, Let Me Reintroduce Myself, which debuted last year, is a testament to that.

The Hollaback Girl has also had a couple of widely successful smash hits with some pretty popular Jamaican musicians, namely Bounty Killer back in 2001 when No Doubt collaborated on the single Hey Baby.

They also did the single Underneath It All with Lady Saw the same year.

After going solo, Gwen also recorded a track with Damion ‘Jr. Gong’ Marley, entitled, Now That You Got It in 2006.

Stefani also has an upcoming collaboration with Dancehall artistes Sean Paul and Shenseea on a Rocksteady tune called Light My Fire, which will be featured on Paul’s forthcoming album, Scorcher.