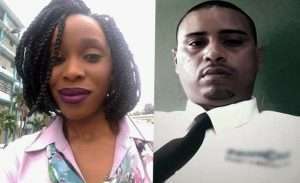 (TRINIDAD EXPRESS) – A man chopped his wife to death and hanged himself at San Fernando on Tuesday night.

It happened at a third-floor apartment at housing building Five at Embacadere.

A police report identified the woman as Adeina Alleyne, 36, a supervisor with Puff n Stuff, a popular bakery in San Fernando.

Neighbour told police there was an argument and then screams from the apartment around 7.30 p.m.

She collapsed in a bedroom and died.

Her husband and killer, security guard Dwight Waldropt, 37, hanged himself on a cord tied to the ventilation bricks of a washroom area of the building.

Crime Scene Investigators gather evidence on the third-floor apartment building at Embacadere, where Adeina Alleyne was murdered by husband on Tuesday night in San Fernando.

Police were told Waldropt attacked Alleyne with a chopper.

The seven-year-old son went to neighbours for assistance.

Neighbours attempted to intervene and subsequently found the female with chop wounds in the bedroom.

Alleyne’s grandmother had to be taken to hospital after a suspected heart attack.