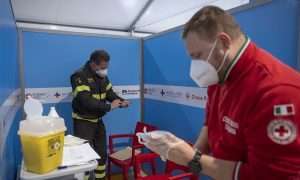 (AFP) — The Red Cross warned Wednesday of a glaring gap in the plans to roll out COVID-19 vaccines around the world, saying remote communities risked missing out.

The International Federation of Red Cross and Red Crescent Societies are aiming to help vaccinate 500 million people against the disease.

The IFRC, which calls itself the world’s largest humanitarian network, is planning to throw its expertise into the distribution and acceptance of vaccines among some of the hardest-to-reach communities.

But it said that while the procurement of vaccines and delivery to airport hubs was crucial, “too little thought” had been given to the next step: how those doses would be distributed within countries, including the “last mile” in getting to those furthest away.

But so far the IFRC has raised only three per cent of that figure.

“Without this funding, a gap will remain between the vaccines that will ultimately end this pandemic, and some of the most vulnerable and isolated people in the world,” said IFRC president Francesco Rocca.

The IFRC is planning to bolster national vaccination efforts, including supporting logistics and countering misinformation about vaccine efficacy.

The Covax global vaccine-sharing facility shipped more than 20 million doses to 20 countries as the scheme aimed at ensuring poorer nations get access to jabs took off last week.

Covax is aiming to distribute another 14.4 million COVID-19 vaccine doses to 31 more countries this week.

“Initiatives like Covax ensure that vaccines will reach the tarmac of airports in the capital cities of participating countries,” said Rocca.

“However, they need to be complemented by initiatives designed to get those vaccines off the tarmac and out into the arms of all who need them.”

The IFRC’s local teams intend to identify high-risk individuals who might be invisible to the authorities for any number of cultural, linguistic or social reasons.

Its national societies are already working to help vaccination campaigns and an estimated seven million people have been jabbed so far with their help — the majority in the Asia-Pacific region.

In Brazil, Red Cross volunteers and staff are vaccinating extremely isolated communities in the Amazon, Rocca told reporters, while efforts to vaccinate unregistered migrants were under way in the Maldives, Greece and the Czech Republic.

He said the world could not afford to ease its efforts to control the virus just because vaccine roll-outs were under way.

“We must not confuse with the beginning of the end with the actual end of this pandemic,” Rocca said.