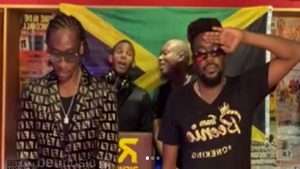 (DANCEHALL MAG) – Dancehall veterans Beenie Man and Bounty Killer are now among the 43 creatives with an equity stake in the Triller Network, after the company acquired Swizz Beatz and Timbaland’s Verzuz platform.

The success of Verzuz has now translated into a new deal for the two American producers, who announced today that they’ve joined the Triller Network and will now form part of the management team. Beatz and Timbaland did not forget to show their appreciation for the artists that took part in the Verzuz battles and who helped them to build a successful and sought-after brand.

According to an exclusive in Billboard Magazine, they’ve decided to give a portion of their equity stake to the 43 entertainers who’ve appeared on Verzuz, including Beenie Man and Bounty Killer.

The Triller Network is the parent company of the Triller app, a TikTok competitor that is used by athletes and celebrities like Cardi B and Marshmello. Swizz Beatz and Timbaland will now help oversee music and other company strategies.

Last year, 2020, the coronavirus pandemic effectively shut down most of the entertainment sector in Jamaica and around the world. It would take some keen innovation and a futuristic vision to bring entertainment home to fans and that’s just what Swizz Beatz and Timbaland did when they created the Verzuz battles in March 2020.

Beenie Man and Bounty Killer’s May 23 battle set a new standard and gave the series a significant facelift when they were the first to compete in the same space, in true Dancehall sound clash style. Their battle was also deemed the most favorite by both the founders and fans, and on the night of the clash, they pulled in over 500,000 live viewers on Instagram alone. That number grew significantly as fans returned to take in the classic battle after it was done.

The ‘Verzuz Effect’ also resulted in streams of Beenie Man and Bounty Killer’s music catalogs surging by several hundred percentage points after their battle. Their catalogs are set to expand this year as both artists are expected to drop new albums: Simma and Kings of Kingston, respectively.

Co-owner of the Triller Network, Bobby Sarnevesht, committed to honouring the music and the artists as they move forward.

“There is no more disruptive and innovative brand in music today than Verzuz. Both Triller and Verzuz share the ‘artist first, music first’ vision. We view this acquisition as more of a partnership than an acquisition, as Swizz, Timbaland and the other 43 artists who are all becoming shareholders and partners in Triller Verzuz from this day forward become our voice,” he added.

Swizz Beatz and Timbaland said that the joining of forces would help to see the brand rise and give artists another platform on which to entertain.

The pair also shared that they felt the move would be a game-changer in the realm of entertainment: “To have partners in Triller who share our vision, specifically to celebrate and elevate the amazing artists who continue to shape culture around the world and give the consumer more direct access, is game-changing.”

They added it was a dream come through for them and all the artists who will be involved in mapping the way forward.